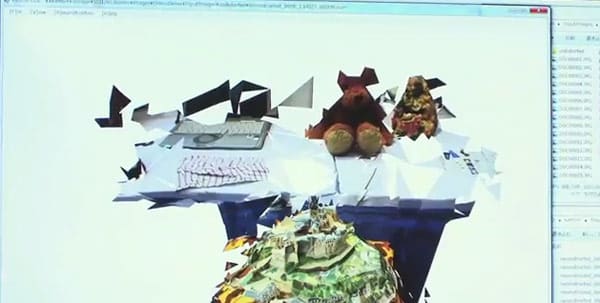 Reconstructing 3D spacial data has long been possible, but convincing the average consumer of that would be another chore entirely. In the future, however, it may be simpler to believe. A crew of researchers at Tokyo Institute of Technology are hard at work developing a new system that "quickly creates 3D spacial data from photos taken with a digital camera." According to Assistant Professor Akihito Torii, the method can use JPEGs from a conventional point-and-shoot camera -- no specialized equipment needed -- which are then shot over to a PC via a wireless Eye-Fi SD card. From there, it's the magic of the software that takes over, reconstructing a 3D model in mere minutes. The goal? To save Earthlings time, naturally. As it stands, pilots shooting aerial shots usually have to land, offload imagery and see if they missed anything; in theory, this could allow a more real-time process to fall into place, enabling patch shots to be taken just minutes after they're missed. Looking for more? Hit up the explanatory video just after the break.

Source: DigInfo
In this article: 3d, camera, eye-fi, research, spacial data, SpacialData, Structure from Motion, StructureFromMotion, tokyo, Tokyo Institute of Technology, TokyoInstituteOfTechnology, university, video
All products recommended by Engadget are selected by our editorial team, independent of our parent company. Some of our stories include affiliate links. If you buy something through one of these links, we may earn an affiliate commission.
Share
Tweet
Share