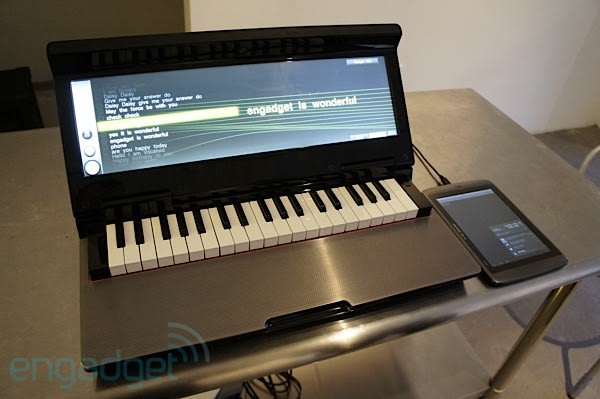 Did you enjoy our first look at the latest apps being showcased on Miselu's Neiro Android-powered synth here at Google I/O 2012? Want more? You've come to the right place. As promised here's an exclusive hands-on with Yamaha's Vocaloid app demoed by the man behind the technology himself -- video game designer Tetsuya Mizuguchi. We got the chance to play with an early build of the software running on the same 3-octave prototype version of the synth that we last saw at SXSW. The verdict? It works pretty well considering the pre-alpha status of the code. The app features two modes of operation -- edit and play -- the former letting you type or speak text and map it to an existing melody and the latter allowing you to chose preset sentences and "sing" them with the keyboard. Pictures are worth a thousand words, so take a look at our gallery below and watch our hands-on video after the break.

9
In this article: Android, app, Google, Google IO, Google IO 2012, GoogleIo, GoogleIo2012, hands-on, Miselu, Miselu Neiro, MiseluNeiro, Neiro, synth, Synthesizer, Tetsuya Mizuguchi, TetsuyaMizuguchi, video, Vocaloid, Yamaha, Yamaha Vocaloid, YamahaVocaloid
All products recommended by Engadget are selected by our editorial team, independent of our parent company. Some of our stories include affiliate links. If you buy something through one of these links, we may earn an affiliate commission.