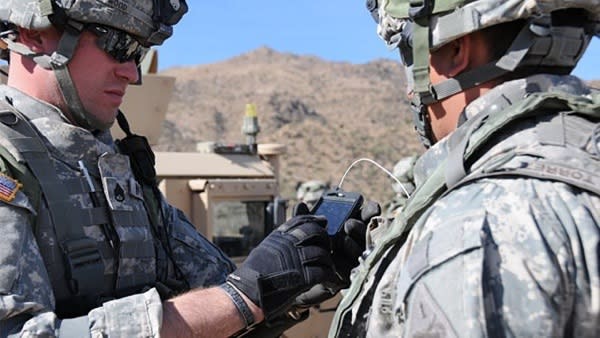 Smartphones: the future of wartime communication? That is the goal of the US Army through the development of its portable wireless network, dubbed Warfighter Information Network-Tactical or WIN-T. The Army hopes to leverage WIN-T to bring near-instant digital communication to the battlefield by outfitting soldiers with Motorola Atrix handsets running a heavily modified version of Android. An exposé by Wired explains that the system's main goal is information and intelligence sharing; between both soldiers and central command. Friendly troop positions, suspicious vehicles or persons and surveillance video from unmanned areal vehicles (UAVs) can all be mapped and shared with servicemen and women in the field. It's been a dream of the Pentagon since the mid-nineties, but has only recently become monetarily and technologically feasible due to advances in smartphone processing power. It's nerdy, it's fascinating... and this is the stuff the Army is willing to talk about. Hit the source link for the full write-up.

Source: Wired
In this article: Android, Army, Atrix, Department of Defense, DepartmentOfDefense, DoD, mobilepostcross, Motorola, Motorola Atrix 4G, Pentagon, Sci/Tech, UAV, US Army, UsArmy, Warfighter Information Network-Tactical, WarfighterInformationNetwork-tactical, Win-T, Wired
All products recommended by Engadget are selected by our editorial team, independent of our parent company. Some of our stories include affiliate links. If you buy something through one of these links, we may earn an affiliate commission.