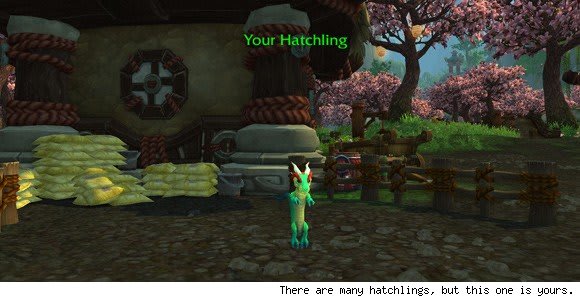 With the reopening of the Jade Forest, several quests and dailies that were no longer accessible have been reopened, including the opportunity to get your very own cloud serpent. Unlike the cloud serpents you can purchase from the various reputation vendors around the world, this cloud serpent is yours -- raised by you from the moment it hatches until the moment you can slap a saddle on its back and fly away into the clouds.

Much like the Netherwing in The Burning Crusade or the Winterspring Frostsabers and Venomhide Ravasaurs for Alliance and Horde, respectively, your cloud serpent is obtained through a series of daily quests in which you take care of the little guy, keep him safe from certain doom, clean up after him, and keep him amused. You can start the chain by heading to the Arboretum in Jade Forest at level 90 to speak to Elder Ani the Serpent Master, who will take a good look at you and determine whether you've got the stuff to keep a cloud serpent. Don't worry, you do.

Ani will send you to the Windward Isle in the northeast, which is where the Cloud Serpent Matriarchs make their homes and build their nests to raise their young. Unfortunately, the island has come under attack. Saurok are openly attacking the matriarchs and stealing the eggs. You'll have to fight the saurok, lead some frightened hatchlings back to their proper nests and steal the eggs back from the saurok. Once you've done so, you'll be able to choose an egg to take back as your own.

You can choose from yellow, blue, or green -- but make sure you're happy with your choice, because you don't get to change your mind. Well, you can if you inadvertently clicked the wrong item to begin with; however, heading back to the island and handing over the egg will trigger a mini-cinematic in which the egg hatches, at which point you're stuck. So pick wisely! I went for green on the beta just because I like the color green, but after seeing the full-grown yellow serpents, I think I may go that route on live.

Once your hatchling has hatched, a ton of daily quests open up for you to choose from. The nice part about these dailies is their variety. Some quests will have you playing catch with your hatchling and, yes, picking up the piles of poop it has left strewn all over the fields. (You didn't really think we were going to get away from the poop quests, did you?) Some quests will have you killing nearby wildlife that poses a threat to the hatchlings.

And in a twist from the Netherwing, Frostsaber or Ravasaur quests, some dailies will have you using your professions to help out around the area. You can fish for minnows to feed the hatchlings, or you can cook up some fish cakes with your cooking skill, or you can bandage hatchlings that have been hurt. The use of profession quests is really nice here -- it means if you're still working on leveling your fishing, cooking, or first aid, you can work on leveling up the skill while you're helping out your hatchling.

I have not finished the chain at this point in time; however, I can say that the dailies are fun, the cloud serpents are adorable, and I can't wait to see mine grow up. I'll report more as I uncover it -- but this is easily the simplest mount to obtain in Mists of Pandaria at this point. It's free, and all it takes is a little time investment. And who doesn't want a mount that they've brought up all by themselves?

In this article: cloud-serpent-hatchling, cloud-serpents, daily-quests, mists-of-pandaria, mists-of-pandaria-beta, netherwing, order-of-the-cloud-serpent, venomhide-ravasaur, winterspring-frostsaber
All products recommended by Engadget are selected by our editorial team, independent of our parent company. Some of our stories include affiliate links. If you buy something through one of these links, we may earn an affiliate commission.