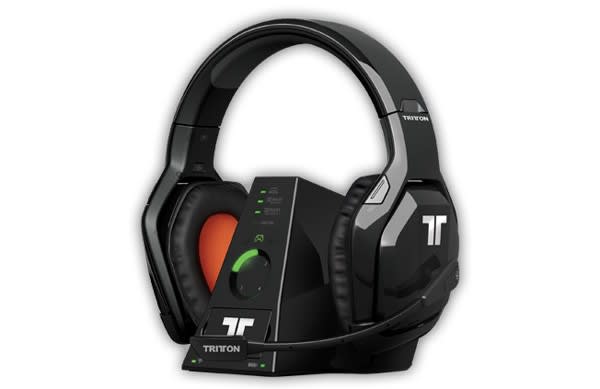 Companies are no strangers to superlatives where new kit is concerned and Mad Catz is definitely no exception. With the release of its newest flagship, the Tritton Warhead 7.1, the outfit's claiming a novelty in the Xbox 360 space, labeling these cans as the "first... to deliver two-way communication" without the need for wires or controller adapters. Made specifically for Microsoft's green X gaming platform, the pair of 50mm drivers pump out Dolby 7.1 virtual surround sound over a 5.8GHz channel for up to 33ft of interference-free smack talk. The headset also offers gamers the ability to monitor their in-ear voice levels (SVM), control the volume of other players, as well as select EQ presets for a variety of media playback. And just so you never have to press pause to keep the friendly banter (read: cusses) flowing, the company's bundled in a dock and pair of of Li-ion batteries for "hot-swappable" recharging. These over-ears are available now for a cool $299 at BestBuy and the company's own site, so if you take your first-person action seriously, prepare to part with a few Benjamins. Official presser after the break.

The flagship in the Company's exclusive range of Xbox 360 gaming headsets, the Warhead 7.1 is the first headset in the world to deliver two-way communication via the Xbox 360 console, negating the need for a chat cable or adapter to be connected to the gamers' controller.

"We believe premium products such as the Warhead 7.1 have longer product life spans and offer the best means for us to target competitive and passionate gamers who demand the best." said Darren Richardson, the President and Chief Executive Officer of Mad Catz Interactive, Inc. "In addition to our focus on creating new products, we also look forward to leveraging our expanded geographic footprint and worldwide sales and marketing initiatives to bring added visibility to this one-of-a-kind product."