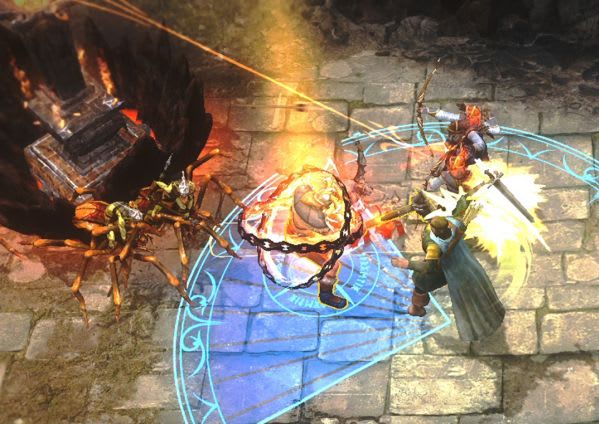 We first saw Guardians of Middle-earth in action back at E3 this year, and it was quite impressive even then. Monolith has taken the PC-centric gameplay of the emerging MOBA (or DotA, or LoL, or even action RTS, whatever you like to call it) genre, and translated it over to a console and a controller. But since that first play at E3, I've gotten a few more chances to play the game at Comic-Con and PAX. GOME (acronyms!) is more than just a console clone of the popular League of Legends and the upcoming Dota 2.

Monolith has iterated on this complex strategy/action genre in a few different ways. Here's a list of five different things, whether you're a level 30 summoner or a Venomancer newbie, that you'll find new and interesting about Guardians of Middle-earth when it arrives for consoles later this year.

1. Soldier/minion and Tower Upgrades
In a MOBA game, you can usually customize your characters in the middle of a match (to counter opponent strategy) by buying items, but in GOME there's no item store at all. To make sure you can still tweak gameplay when necessary, Monolith has instead allowed you to pick upgrades in-match for soldier minions and turrets. You can choose to have a turret focus on defense or damage, for instance, or change an outgoing soldier wave to consist of siege units (good against enemy structures) or other unit types.

All of these upgrades are per lane, so certain specialties can tweak their defenses to match their gameplay. And as senior producer Ruth Tomandl says, the only real cost is time, that could instead be spent leveling up your character. "You can upgrade anything at any time, once you're at a high enough level," she says. "It's just a time consumption thing -- do I want to upgrade towers or do I want to get XP?"

Both sets of upgrades unlock when players hit level 6, and then it's up to you to configure those uncontrolled defenses, with new options unlocking as the game goes on.

2. The Tactician Class
In general, heroes in Dota 2 and League of Legends come in three flavors: Attack Power (where basic attacks do the most damage), Ability Power (where special attacks are the main source of damage), and Tanks (where high hit points and armor make survival a priority). There are certainly other types of heroes (some heroes can support with heal spells or buffs), but in general most heroes fall into these three categories.

Monolith has those classes as well (with setting-specific names), but it also has a new kind of class called the Tactician. Tactician characters are built instead around positioning and strategy. They can create emplacements like mines or turrets, and use big area-of-effect spells to control the movements of other heroes and minions. They can also be very strong against towers, similar to the "Siege" hero type that Blizzard is working on with its Dota variant.

The Tactician class originally rose out of the tower upgrade feature, says Tomandl. Tacticians could initially upgrade towers faster and have more options. "But we eventually found," she says, "that just having a class that was really good at lane pushing was not only useful to us, but was really interesting." Tacticians bring a new type of specialization to MOBA heroes, slightly different from what we've seen before.

3. The Rune Belt
Again, Monolith decided with GOME that it didn't want to create an in-match item store, but then still had to deal with the issue of player progression, and the other solution it's come up with is something called the rune belt. Outside of matches, you can buy and unlock various runes, gems, and relics, and then can place them on a "belt" that slowly unlocks new stats and abilities as characters level up in-match.

For example, one rune could unlock three different parts, that eventually grants a damage-over-time bonus to your basic attack when fully unlocked. At a highly competitive level of play, runes will need to be configured just right, to work both with the characters' weaknesses (you might use runes to protect a less heavily armored Guardian, for example), and opponents' strategic choices. Multiple rune loadouts can be configured outside of matches, and combatants can even switch belts – before the game begins, but after the opponents' heroes have been shown, in order to react to what they expect the match may be like.

There are also default loadouts to play with if you don't want to spend the time customizing your characters exactly. However, creating the rune belt takes that item customization out of the frantic game itself, and makes for some interesting strategic choices even when not on the battlefield.

4. A Single-Lane Map
League of Legends has had a player-generated sub-gametype bouncing around for a while called ARAM (All Random, All Middle), in which all ten players in a match promise to stick to the one middle lane and just battle it out in one big melee rather than strategically using the whole game map (one set of pro players even famously decided to do this during a championship match recently).

And now Monolith has made this gametype official with a single-lane map, where all ten players get one straight, long battleground to face each other down, no extra healing available. "There's no healing pad [at the ends of the lane] and you also get experience over time," says Tomandl. "It's not all random, you can still pick your guys. It's very much about knowing exactly the range of all your stuff and exactly the range of all of your enemies' abilities and being careful about all those ranges."

The single lane map still has minions coming down the middle and a fortress to defend on either side, and there are a few shrines and extras off of the main lane, with hidden brush areas for players to fight in. The focus of the map is one big melee, and that's something that players have generated on their own, even if many MOBAs haven't officially sanctioned just yet.

5. Shrines
Most MOBA games, starting with Dota, have "creeps," or small NPC characters hidden off of the main lanes that provide extra buffs and rewards to those who take the time to find and kill them. But GOME takes that concept further with "shrines," which are small control points between and outside the lanes that provide extra teamwide buffs (like a few percentage points of health or regen) to anyone who claims them by standing close for a set amount of time.

Not only does the idea of a teamwide buff make friendly sharing easier, but Tomandl says these shrines have lead to an unexpected effect. "You get fights at the shrines early on," she says. "Because our three lane map is so much smaller, it's easier for players to switch between lanes, so you end up with more map-wide strategic play earlier in the match. And the shrines really encourage that." Shrines start out invisible to everyone, but when controlled they open up visibility between the lanes, so they also serve as vision wards to anyone willing to claim them.

Adding such a dramatic bonus in between lanes means it can get bloody in there fast. There are still creeps and buffs elsewhere on GOME's map, but the shrines (and all of these innovations) add yet another interesting element to an already very deep and rich gametype.
In this article: champions, guardians, guardians-of-middle-earth, heroes, league-of-legends, microsoft, moba, monolith, pax-2012, pax-prime-2012, playstation, preview, ps3, xbox
All products recommended by Engadget are selected by our editorial team, independent of our parent company. Some of our stories include affiliate links. If you buy something through one of these links, we may earn an affiliate commission.