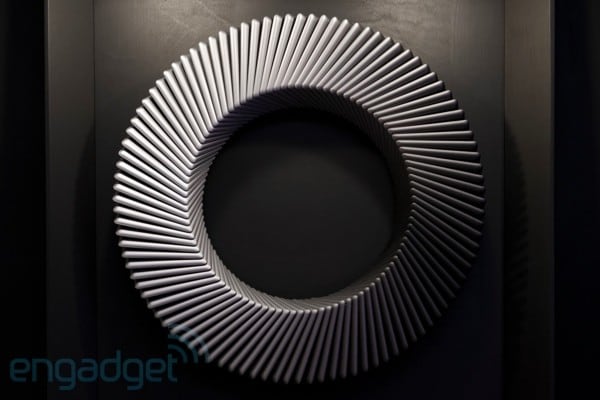 ASUS is never shy at showing off its creative side. At Taiwan Designers' Week last Sunday, we spotted the company's above art installation dubbed "Palette": a mesmerizing circle of 50 overlapping Nexus 7 back covers, each in its very own shade of color. Interestingly, all of these were actually used in the development process of Google's Nexus 7, which just goes to show the kind of mad dedication ASUS had put into the joint project.

But wait, there's more! To match the event's "Flow" theme this year, ASUS decided to also show off parts of the design process that determined the final appearance of its other hero products -- hence the title "Becoming" for the booth's own theme. For instance, much like what the company's lovely Michelle Hsiao showed us on the Engadget Show, the booth again featured a handful of tablet chassis parts and dummies (mainly of PadFone, Zenbook, Transformer Prime and a 7-inch device) at different stages of their development, complemented by a generous selection of colors and finishes. Only this time the designers used some of them to create gradient wall art that we wouldn't mind having at home. Check them out after the break.

Additionally, on one end of the table ASUS displayed a bunch of interesting handicraft that came out of experiments with different materials: mesh, cardboard, wire, foil and more. Such workshops usually take place about once a month, and they were what ultimately led to the birth of ASUS' leather and bamboo laptops back in the days. We were most intrigued by the cement eggs and cement speakers at the booth, but we have a feeling that ASUS won't be releasing a cement-based device any time soon. At least the designers had a good sense of humor.

Here's an interesting nugget: it turns out ASUS has been a quiet but keen supporter of Taiwan Designers' Week since the show's 2007 debut. A bit of digging revealed that both the original and the current event coordinators have ties with ASUS: the former person, Yulin Hsu, moved from ASUS to Pegatron not long after the first event due to the big Asustek split; and then Timothy Liao, who's currently with the ASUS Design Center, took over the role. Still, apart from the slightly larger booth, there's no sign of ASUS anywhere else -- not even a mention on the list of co-organizers or any of the marketing materials, which is proof that both the company and the organizers are truly passionate about just creating a platform for all Taiwanese designers. To this we say, "Nice one!"

If you're into quirky designs or craving for inspiration, then do consider going to the show -- it's still going on at the Taipei Expo Park (next to Yuanshan Station) and ends on September 23rd. And be prepared to spend some cash on the seemingly pointless yet tantalizing little objects.

Ross Wang of Engadget Chinese contributed to our photo galleries.

Before Sunrise made with Zenbook:

After Rain made with Zenbook:

Beatles made with Transformer Prime: