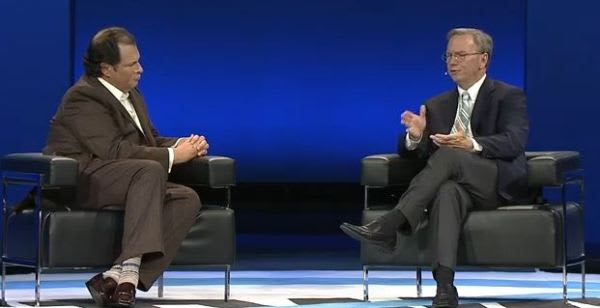 Eric Schmidt's recent trip to Seoul wasn't all spontaneous Gangnam dancing. Google's former-CEO / current executive chair had a lot to say during the Korean launch of the company's Nexus 7 tablet, bemoaning the patent wars that have ensnarled the industry, telling the crowd, "literally patent wars prevent choice, prevent innovation and I think that is very bad. We are obviously working through that and trying to make sure we stay on the right side of these issues." The war for marketshare ought to be fought with the release of better products, rather legal maneuvering, according to the executive.

But in spite of Apple's role in the battle -- and the company's decision to go it alone on products like its troubled Maps app -- Schmidt still had kind words for Cupertino, calling the company "a very good partner," and adding that the, "two companies are literally talking all the time about everything." The exec also told the crowd that he'd be meeting with Samsung, one of the company's "most important partners," during the trip, "as I do every time I come here."

Source: Korea Times
In this article: android, apple, eric schmidt, EricSchmidt, google, korea, nexus, nexus 7, Nexus7, patent, patent war, patent wars, PatentWar, PatentWars, product, product launch, ProductLaunch, samsung, schmidt, seoul
All products recommended by Engadget are selected by our editorial team, independent of our parent company. Some of our stories include affiliate links. If you buy something through one of these links, we may earn an affiliate commission.
Share
Tweet
Share
Save