Found along the sidelines of Panasonic's CEATEC booth, the AX series Ultrabook is a foldable hybrid that will be arriving in Japanese stores later this month. Ready to launch with Windows 8 (both standard or Pro) built-in, the Ultrabook houses a 11.6-inch touch display at the ever-popular 1,366 x 768 resolution, although it feels a little on the thick side, and is unmistakably Panasonic in its styling. Connectivity options are legion, with two USB 3.0 ports on the right edge, accompanied by HDMI socket. On the other side, there's an SD card reader, ethernet, power, mic and headphone ports. The hinge seems suitably solid, and while that touchscreen isn't the most attractive we've seen on Windows 8 hardware, the keyboard felt pretty similar to existing business laptops and our fingertips had plenty of space. Otherwise, we were left to play with a Japanese iteration of Windows 8, which seemed nice and responsive in both tablet and notebook setups, although our playtime was limited.

The AX series will launch in Japan on October 26th in three different permutations, starting with an Intel Core i5 processor clocked at 1.7GHz or 1.8GHz, and a Core i7 at 1.9GHz. There's 4GB of memory and a 128GB SDD in all three, while the hybrid bucks the trend by offering a removable battery, with both the faster Core i5 and the Core i7 models coming with an extra cell bundled in. That top-end processor will also arrive with connectable projector for business types. Check out our brief hands-on after the break, or hit the source for the full list of specs. 11
Source: Panasonic
In this article: AX, ceatec, ceatec 2012, Ceatec2012, core i5, core i7, CoreI5, CoreI7, hands-on, hybrid, japan, panasonic, panasonic ax series, PanasonicAxSeries, tablet, ultrabook, ultrabook hybrid, UltrabookHybrid, video, windows, Windows 8, Windows 8 Pro, Windows8, Windows8Pro
All products recommended by Engadget are selected by our editorial team, independent of our parent company. Some of our stories include affiliate links. If you buy something through one of these links, we may earn an affiliate commission.
Share
Tweet
Share 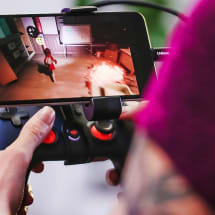