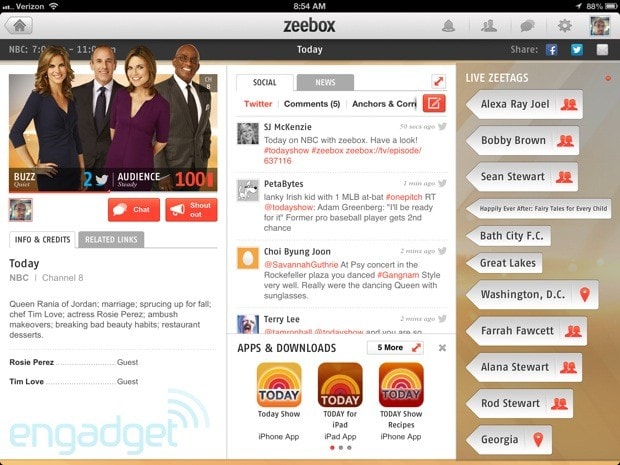 We love riffing on TV shows like a latter-day MST3k, which means that companies are desperate to harness our homespun satire to their own ends. Second-screen start-up Zeebox has inked a deal with MTV and Comedy Central owner Viacom, offering exclusive content in exchange for on-screen advertising. That said, we're not sure if the promise of behind-the-scenes clips would be enough to draw us away from just cattily judging the Project Runway contestants on Twitter, where we're less likely to be moderated into oblivion.

"zeebox was built as an open platform that programmers and operators can easily use to enhance their brands on the second-screen, engage with fans and build new ways to bring the TV and Internet advertising industries together," said Ernesto Schmitt, zeebox CEO and co-founder, "The most engaging, compelling consumer experience on the second screen will be driven by the depth of content and the degree of integration with established TV brands – for this reason we're delighted to be working with Viacom and its world class entertainment brands."

"Viacom has the most socially engaged audiences anywhere, and we're constantly striving to give our fans new ways to discover and connect with our content," said Rich Eigendorff, Chief Operating Officer Viacom Media Networks. "zeebox is a powerful new platform to create even richer and more interactive experiences around our programming, and build an even deeper connection between our brands and our fans."

The brainchild of former EMI executive Ernesto Schmitt and former BBC iPlayer CTO Anthony Rose, zeebox uniquely enables consumers to discover what to watch by browsing comprehensive TV listings, social media and personalized recommendations. Viewers can engage with their favorite television personalities directly through zeebox and even buy the products they see on TV. zeebox also automatically displays richer information about each program as viewers are watching.

Like Comcast Cable and NBCUniversal, Viacom is backing zeebox with investments and promotional commitments, while preparing to enhance their top TV shows on zeebox. zeebox's OpenBox API is designed to enable any TV network to enhance its shows on zeebox, distribute exclusive content, and connect directly with fans whilst enabling them to continue using their favorite social media, such as Twitter.

zeebox's revolutionary OpenBox API allows content owners to enhance their shows and channels on the zeebox app in a matter of hours, distributing exclusive content to consumers, connecting directly with fans through live interactions and social engagement, and monetizing the second screen alongside TV commercials through synchronized, targeted, relevant advertising and affiliate links.

The zeebox app is available fo free from the App Store on iPhone, iPad, and iPod touch or at

The Web version is available at zeebox.com.

Via: TechCrunch
In this article: Advertising, Content, Deal, Entertainment, hdpostcross, hdpostmini, Home Entertainment, HomeEntertainment, minipost, MST3k, Riffing, Second Screen, Second Screening, SecondScreen, SecondScreening, TV, Tweets, Twitter, Viacom, Zeebox
All products recommended by Engadget are selected by our editorial team, independent of our parent company. Some of our stories include affiliate links. If you buy something through one of these links, we may earn an affiliate commission.
Share
Tweet
Share