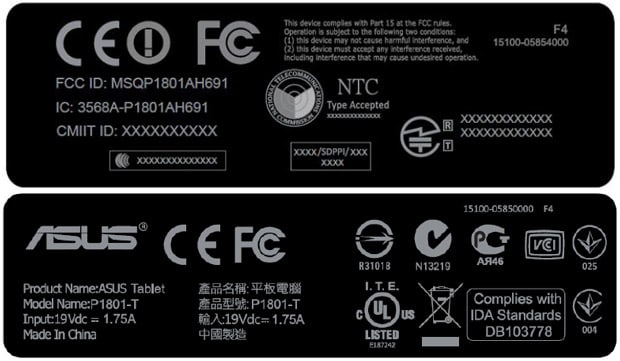 The FCC sometimes gets a peek at hardware and reveals nothing but a model number to hint at what's passed through its labyrinth. The latest filing leaving us scratching our heads is for the ASUS P1801-T, a "tablet" which could be the final version of the Transformer AiO prototype we saw back at Computex. How did we arrive at the AiO? Well, the model number is a possible clue -- ASUS' Eee Slate B121 has a 12.1-inch panel, so P1801-T may point to this device having 18 inches of screen. As ASUS' dual-OS prototype all-in-one is the only (sort of) tablet we've seen with roughly that many inches, we assume the company is getting paperwork done before a proper launch at CES 2013. A "P1801" running Android 4.1.1 has also popped up at GLBenchmark, with Tegra3 graphics, a 1,920 x 1080 graphics and a Cortex-A9 CPU inside. If ASUS is keeping two OS's as per the AiO prototype, that processor caters for only one Microsoft product -- Windows RT. We'll just be kept wondering until we hear something official, but at least for us, an 18-inch Android / RT super-tablet and part-time desktop sounds like it could be a hard sell.

We noticed that the original PR from Computex 2012 stated that the tablet portion could also "become a wireless display for the AiO PC," which could mean that the base unit is full-fledged Windows 8 machine with x86 hardware, making it a much more tempting idea.

Source: FCC, GLBenchmark
In this article: asus, asusp1801, asusp1801-t, AsusTransformerAio, fcc, FederalCommunicationsCommission, GLBenchmark, p1801, p1801-t, transformeraio
All products recommended by Engadget are selected by our editorial team, independent of our parent company. Some of our stories include affiliate links. If you buy something through one of these links, we may earn an affiliate commission.