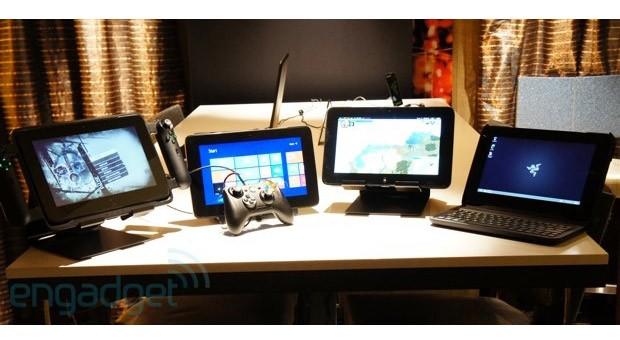 The PC ecosystem is no longer as simple as it once was -- first there were desktops, then laptops, then tablets, then all-in-ones. Buying a PC now is more nebulous than it ever was. You could build your very own rig, piece-by-piece, or you could buy one of the many, many pre-fab options out there (or some mixture of the two, of course). And then there's even more outside-of-the-box options, like Razer's recently re-introduced Edge (aka "Project Fiona"), which occupies a space all its own. Part laptop, part tablet, part home console, and part portable console, the Razer Edge is the fruition of Razer CEO Min-Liang Tan's dream to create a "true" portable PC gaming machine. And weighing in at just two pounds, the Edge is dramatically lighter than Razer's other portable gaming machine, the Blade (which clocks in at a whopping 6.6 lbs.), making it the company's first actually portable game console.

Keeping those Blade comparisons rolling, the base level Edge at $999 features a slight step down from the Blade's Core i7 Ivy Bridge processor to a 1.7GHz Intel's Core i5 (the Edge Pro at $1299 boosts that CPU to a 1.9GHz Ivy Bridge i7, more closely matching the far costlier Blade). Thankfully, the Edge's GPU is not only discreet, but also powerful and (thankfully) not fragmented between the two models: an NVIDIA GT640M LE powers the graphics on both, while 4GB or 8GB (respectively) of DDR3 RAM keeps it all running smoothly. The base model Edge holds 64GB of content in a speedy solid state drive (128GB in the Pro model, upgradeable to 256GB). But let's be honest -- you already know most of these specs, right? What matters is how all this stuff pans out, and we've just gotten our first chance to find out. Head past the break to see how Razer's Edge fared. Razer's advertising the Edge as "the world's most powerful tablet," and it's certainly no slouch, hyperbolic statements aside. The touchscreen quickly moves from pane-to-pane in the Windows 8 UI, and we jumped between games and other apps without a hitch. The tablet without any attachments is relatively light, but it's no more comfortable to hold long-term than any other 10-inch tablet; it's unlikely you'll be very happy hanging onto that form factor for any real length of time, though it might be hard to avoid with a touch-enabled Civilization V at your fingertips. Of course, Razer's hoping you'll snag it's detachable controller accessory (sold separately for $249, or included in a bundle with the Pro for $1499), which not only makes gaming far more ergonomic, but much more flexible from a control standpoint.

That said, as a standalone tablet, the Edge is more than capable. It's a weight match for Microsoft's Surface, but bests Microsoft's hardware in both form and function (our tune may change with the Surface Pro, but it's hard to stack up Win8 RT against Razer's full Win8 experience). It's also thankfully free of bloatware, which we always appreciate.

The Razer Edge with its detachable gaming controller is where the device starts really showing its strengths. Is it a bit unwieldy handling a 10.1-inch tablet while holding force feedback-enabled controllers on each side? Sure is. Is it also tantalizing playing high-def PC games on a 10.1-inch high-def IPS display with solid, console-quality controls? Double yes. Alarmingly so. Razer's applied its experience creating excellent Xbox 360 controllers (see: Onza, Sabertooth) to the Edge's controller attachment and it really shows. The buttons are solid all around -- the clicky variety we've come to expect from Razer -- and the analog sticks are above the quality we've seen on various gaming-centric tablets (we're looking at you, Wikipad). Triggers and shoulder buttons out back round out the package, and feel of similar quality to the rest of the peripheral. Switching between the controller and the touchscreen is not an option here, so you'd better be ready for some gaming should you attach it.

Beyond just offering controls, however, the attachment can be fitted with an extra 40-watt hour battery (sold separately for $69), essentially doubling the life of the Edge -- not to mention helping enable the device's portability. How much time that offers gamers in the real world is the real question. We'll put the Edge's battery through its paces when the tablet launches in the coming months, but for now Razer's touting "up to eight hours in tablet mode, two to four in PC gaming mode, and up to eight hours with extended battery." It probably wouldn't hurt to keep a power cord nearby for now.

Razer's console dock is perhaps the most interesting device Razer's ever created. Sure, it's "just" a dock for plugging the Edge into at home, but it essentially turns a capable gaming tablet into a full-on home gaming console -- an extremely powerful home gaming console at that. It also enables four players to get in on the fun, adding three UBS 2.0 ports (in addition to the one USB 3.0 port built into both Edge models). It also adds an HDMI out -- resultantly, Razer's Edge may be the first "Steambox" specifically because of the dock. The set up begs to be used with Steam's Big Picture Mode -- something Razer is quick to point out -- and we can't help but agree.

More importantly, though, we love the idea of simply plugging in the Edge and using it like a home console, rather than awkwardly shoehorning a computer into our home media setups. Above all else, the console dock is a game changer for both existing consoles and competing gaming laptops. It cuts out all the hassle (perceived and real) of connecting a PC to the living room TV and facilitates plug-and-play PC gaming from the comfort of the futon. Short of Valve itself releasing its rumored "Steambox" hardware standard, the Razer Edge w/ console dock is the biggest step forward for Big Picture Mode since it launched in beta. It'll be sold separately for $99.

The final peripheral attachment Razer showed us this week was a full keyboard attachment and cover, which essentially transforms the Razer Edge from a tablet into a laptop. The keyboard's still a prototype, and as such won't be available for the Edge's Q1 2013 launch -- we're told it'll become available at some point in Q3, and no pricing is given. While a bit limiting, it's not hard to imagine simply attaching a USB keyboard and using that as need be. Folks looking to use the Edge as a traditional computer may be a bit flustered by this, but we're inclined to not mind too much -- after all, it's the gaming application of the Edge that's most interesting, especially as a living room console.

That said, the keyboard looks and feels nice -- if a bit early, per the cloth flap acting as a spine -- and reminds us of the (very nice) Razer Blade keyboard. Like the controller attachment, the keyboard also contains a space for an extra 40-watt hour battery. As it's still in prototype form, we're reserving judgement for now, but the keyboard attachment could certainly use some improvement from its current form. As it stands, when you flip up the tablet to an open position, it's a bit kludgy where the tablet sits, in a plastic valley that could potentially scratch one side of the device -- a problem that could be easily fixed by production time. Here's hoping it is.

From Project Fiona to Razer Edge (and Edge Pro), the Windows 8 tablet / portable game console / home game console / laptop from Razer has come a long way since its debut at CES last year. It's seen a crowdsourcing campaign on Facebook, a redesign, and now it's finally (almost) ready for primetime. We'll reserve our final judgments for the review that we'll assuredly write when it arrives in the coming months, but for now, color us excited.

In this article: ces 2013, Ces2013, ces2013-highlight, exclusive, hdpostcross, mobilepostcross, projectfiona, razer, razeredge, video
All products recommended by Engadget are selected by our editorial team, independent of our parent company. Some of our stories include affiliate links. If you buy something through one of these links, we may earn an affiliate commission.