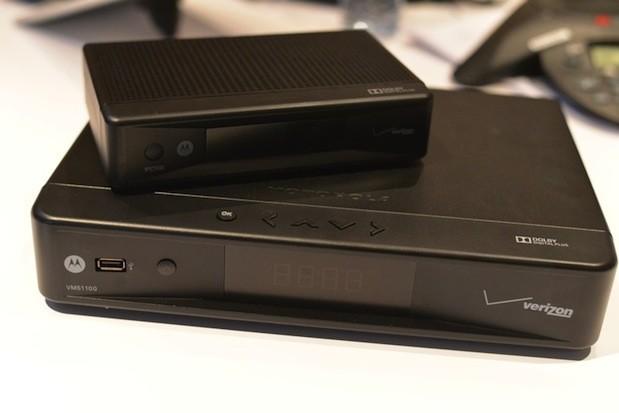 We caught up with Verizon at the booth and had a chance to spend some time with the new whole-home HD DVR and its clients, we were expecting last year. The VMS1100 media server features six tuners and a 1TB hard drive. You can connect up to five Motorola Medios+ IPC1100 IP-based set-top boxes to it to expand your DVR's reach to six TVs. Not enough for you? Well, you can actually setup two Media Servers in your house and then scale the system up to 12 TVs. The experience on the clients is nearly identical to that of the TV connected to the server. The whole thing works over IP and with built-in MoCA it'll run over the existing coax cables in your house. The user interface on the Home Media Server and clients is based on HTML5, which we're told is why it's so snappy and switches so quickly between other apps like YouTube and HSN's Shop By Remote.

What's odd is that the IPC1100 client has a tuner, but it's unused. Instead, the client relies on the server's tuner for live TV. One other unused feature is the server's ability to transcode. Although, Verizon did seem to intent to leverage this down the road, perhaps to prepare transfers to a portable devices for offline viewing. An exact release date wasn't something Verizon wanted to talk about, but it's expected to roll out this year, and presumably it'll be a staged rollout as we've seen in the past. The whole-home DVR is expected to be offered as a premium over the existing offering, but exactly how much more it'll cost is unknown. In this article: ces2013, hands-on, hdpostcross, IPC1100, Verizon, VMS, VMS1100
All products recommended by Engadget are selected by our editorial team, independent of our parent company. Some of our stories include affiliate links. If you buy something through one of these links, we may earn an affiliate commission.