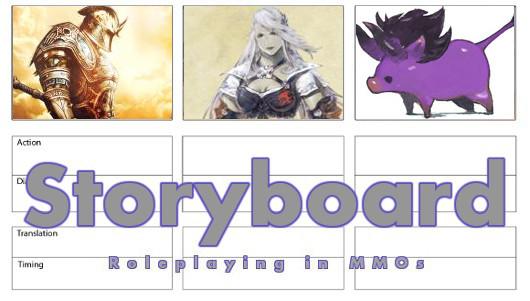 Odds are good that you're going to be moving on from your current game of choice at some point. I'd even ramp those odds up to nearly absolute under certain circumstances (if you're the sort who claims newer games aren't engaging whilst hopping from game to game on a regular basis, for example). This leads to a bit of a problem with a lot of roleplaying stories because there's a very real possibility that your character's arc is going to be truncated as a result.

It's not intentional, but it happens just the same. You spend time building up character relationships at launch, and then as the three-month mark rolls around, people start leaving, playtimes drop off, you get tired of some of the game's systems... and the next thing you know, the people who cared about the character you've been building for some time have all evaporated, leaving you to either make your character relevant again to a whole new group of players or just stop bothering.

One of the things I've been both considering and playing with of late is the idea that maybe this can be embraced instead of feared. Rather than planning something of indeterminate length, you can try working with the assumption that you've got a more limited window to work within and pace yourself according to that.

The core of the idea here is accepting from a roleplaying standpoint that the cast of characters around you is going to change on a semi-regular basis. Three months out from launch is the usual point when the player population first drops off, and a three-month interval for play when choosing a new game isn't terribly unusual. It's enough time for almost anyone to reach the endgame and most people to see what they want from the game itself.

It doesn't have to be three months specifically, though. It can be half a year, it can be two months, or it can be two weeks. The point is identifying a general timeline for player churn, either for yourself or for those around you, and planning around that.

Rather than unfolding your character's relationships and goals over an ambiguous time period, use that time limit as both the beginning and the end point. If your character wants to explore the region of space where her father disappeared in Star Trek Online, you have three months to explore that angle. By the end of those three months, it should be over and done with. That's not to say there won't be long-term personal effects past the three-month mark, but you should be trying to go through all of those character details quickly rather than gradually.

How it can help

The obvious result of this is that your character moves from a slow reveal into a hurtling train carrying a load of plot. This has a number of potential advantages, the first and most obvious being that the parts of your character that you want to explore are getting explored. Instead of having some vague desire to deal with her father issues, you are ensuring that this will be discussed and dealt with pretty much right away.

You can argue that some of the impact is lost when it's not a slow reveal, but more often than not, the alternative is just admitting that you're never going to get to the point you want with the character. There's a nebulous desire to have her address the whole father thing, but it just keeps not happening and you get disillusioned.

Or, as I'm suggesting, set yourself a time limit and focus on that. For the next three months, your character is going to be pursuing this ferociously in addition to tagging along on other expeditions, sometimes weaving the father plot into other roleplaying and sometimes leaving it to one side briefly. By the end of those three months, that character point is dealt with. It's done. You've had the conclusion to the arc and it's time to move on.

Anyone who was planning on moving on after the end will do so, and that's not surprising. But instead of feeling as if she had plans that didn't go anywhere, she'll feel as if she was involved in something that had a clear conclusion and wrapped up nicely.

But what if you don't intend to move on? That's fine. If you're expecting a large-scale turnover every three months, you can easily pace yourself for another plot thread pursuit for another three months as new people come and go. It'll also help newcomers feel they're welcome; rather than taking part in the middle of a developing story, they're jumping in on the ground floor on the same footing as everyone else.

Last but not least, it keeps you interested. It keeps your character advancing and puts a good deal of pressure on you to keep things moving briskly. Instead of just exploring character aspects when you get to them, you'll have a short amount of time to really ramp things up and wrap them up.

In other words, it gets you doing stuff instead of talking about doing stuff, and the worst-case scenario is that you wind up with a completed plot that didn't work out as well. How tragic.

Wait, didn't you try this once?

Long-time readers may well conflate this particular idea with what I tried to do on the RIFT Project last year. Those readers may also recall that I called that project a failure, which I stand by. But there were three mitigating circumstances that make this approach different.

The first is that as I mentioned in my final column on the subject, the project was an obvious failure early on for completely different reasons. The second is that we weren't actually hurrying our plots along in the slightest; I wanted to see if we'd be inspired to do so, but it wasn't an intentional "let's address these character points" effort. And the third and final issue is that the compressed timescale we were on left us with much less time than we had planned.

In short, that project was attempting to do something similar but not the same. So it's still worth considering.

Feedback is welcome in the comments below or via mail to eliot@massively.com. It's a clumsy sentence, I know, but I say it every week just the same. Next week I'm going to look at handling long-running conflicts, and the week after that I want to discuss the importance of playing to the medium.

In this article: changing-games, changing-titles, churn, featured, ideas, opinion, player-churn, player-exodus, player-turnover, roleplay, roleplayers, roleplaying, rp, story, storyboard, time-limits, turnover
All products recommended by Engadget are selected by our editorial team, independent of our parent company. Some of our stories include affiliate links. If you buy something through one of these links, we may earn an affiliate commission.