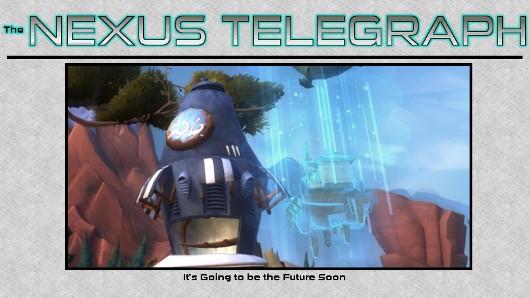 Here's the thing, though: Science fiction covers a pretty wide range of setting, so some of those expectations may or may not come to pass with the game. Today I want to talk about some of those reasonable guesses, the sort of thing that you just think has to be in a science fiction game. Is WildStar going to feature these elements? I'm not sure, but I can make some guesses (which might be proved wrong before the week is out, but guessing is fun like that).

If you have a spaceship, your work is science fiction. There is literally nothing as iconic since even the ubiquitous armored space marine first requires a cool spaceship to fly around in.

Long-time fans of science fiction can no doubt name dozens of stories that didn't involve a single spaceship, but to the mass market, the two are commensurate. It seems like a given that if a game is labeled science fiction, you will have the option to get on something that flies through space and possibly get into a space battle inspired by World War II dogfights or naval battles depending on whether you're a bigger fan of Star Wars or Star Trek.

Verdict: Not terribly likely. Herein lies the problem, Timmy: Nexus is one planet. Players aren't making this planet the first stop on the Intergalactic Mystery Tour; they're trying to settle on this land, research the wildlife, and wipe out those awful Exiles/Dominion lapdogs. You have nowhere to travel to.

It's possible, even likely, that players might make short jaunts into orbit, but it's unlikely that those will be accompanied with any real space battles at launch. Maybe further on down the line with an expansion or two, but not right away.

In fantasy settings, science doesn't work unless it does, and even then it only works so far as as the developers want it to work. Despite the fact that the development of guns basically changed the face of military engagements, it's entirely possible to have guns and swords and magic all co-existing in a fantasy universe. Not so in science fiction; here we expect guns to be appropriately lethal and magic to basically step into the shoes of science.

Some settings go for a very Clarkian view of sufficiently advanced science, while others make insanely complex technologies into common commodities. In both cases, there are two fundamental assumptions: Scientists are basically using magic, and technology is so advanced that access to it is the equivalent of a magical artifact.

Verdict: Not really, but brushing up against it. Science is not magic in WildStar. Magic is magic. The science path does offer some pseudo-magical effects in the long run just the same. Similarly, while technology is highly capable of astonishing things, it seems to be somewhat limited by availability and the nature of Nexus. This seems to definitely be an homage to series like Firefly and Cowboy Bebop, where technology that we find fantastical is both common and not always fully functional.

In the 1950s, you could get away with the idea of a universe wherein not every sentient being was able to instantly access huge stores of information. Right now no one can make that excuse. I have a smartphone that allows me to access databases worldwide, send and receive several different forms of communication, and navigate almost anywhere with simple voice-aided directions.

Maybe every resident of Nexus won't have a smartphone and a Spacebook account, but the fact of the matter is that information should be at your fingertips, both for the benefit of your character and the benefit of the players trying to figure out a new galactic society as they move around.

Verdict: Pretty much certain. While the map interface is still not quite finalized and needs work, we know there will be some form of database, and I would be surprised if it's not all tied together in some way. Plus, the Scientist's entire raison d'etre is collecting these kinds of data. I'd love to see some kind of smartphone-type interface for all of this, for what it's worth, a sort of in-world representation of a device serving multiple believable functions.

We let fantasy games get away with functionally having the same races every time. There are some differences in fine details, but fundamentally, an elf is always an elf, a dwarf is always a dwarf, and so forth. There's a certain stock fantasy archetype that we only deviate from so much.

When we're heading out into the great beyond, we expect just a little bit more. We might accept space-elves or space-orcs or whatever, but most of the time we want to see something kind of unique from our racial options. It's expected that you'll have access to the unusual and the bizarre.

Verdict: Hard to say, but likely. The Aurin and the Granok are probably the most stereotypical races in the game -- agile forest-dwellers and large stony warriors seems pretty much predictable -- but I think that's also why they're the races we've seen first. They give us grounding for the other races, some of which have been hinted at by tester statements and developer commentary. Exactly what those other races will look like is currently completely up to speculation, but I think there are more curveballs in the wings.

Disagree? Concur? Want to bring up another feature? Let me know in the comments or mail your thoughts along to eliot@massively.com. Next week, it's time to answer a remarkably frequent question about the game's upper management and giving your faith to a company with a checkered past.

In this article: carbine, carbine-studios, column, expectations, featured, features, ncsoft, nexus, nexus-telegraph, normal-features, opinion, sandpark, sci-fantasy, sci-fi, speculation, standards, stereotypes, the-nexus-telegraph, typical-features, wildstar
All products recommended by Engadget are selected by our editorial team, independent of our parent company. Some of our stories include affiliate links. If you buy something through one of these links, we may earn an affiliate commission.