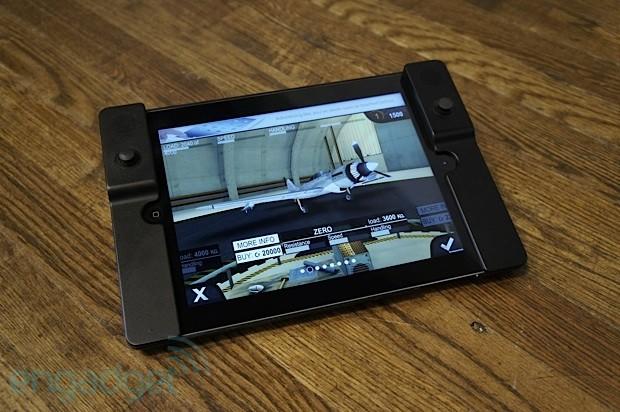 While many of us love playing games on the iPad, we often lament the lack of physical controls inherent to the platform. Audojo is hoping to change this with an iPad gaming case which is launching today on Kickstarter. The accessory works with any iPad 2 or newer, and features a pair of analog joysticks, two shoulder buttons and stereo speakers. Unlike other mobile game controllers like iFrogz's Caliber Advantage or PowerA's Moga / Moga Pro, Audojo skips Bluetooth for a low-latency microphone-based interface.

The case slides open just enough to accommodate an iPad and, once closed, wraps around both ends of the tablet without interfering with any of the cameras, buttons, or the 30-pin / Lightning port. Audojo automatically connects to the iPad via the standard 3.5mm audio jack, which is replicated at the bottom of the case next to a power switch, LED and mini-USB connector (for charging). It's important to note that the accessory is not designed to charge the iPad, something that would require a larger battery and increase complexity / cost. We spent some time with a prototype iPad gaming case and came away pretty satisfied -- head past the break for our impressions. At first sight, Audojo's prototype looks a little clunky since it adds quite a bit of bulk to the iPad's figure. Once you pick it up, however, that's all quickly forgotten -- it's light and well balanced and feels comfortable in hand. The analog joysticks and shoulder buttons are in just the right place -- if you're used to playing console games, you'll be right at home. If there's any room for improvement, it's with the pods that house the shoulder buttons, electronics and batteries at the back of the case. These are currently too wide but Audojo plans to remedy this before production thanks to an improved circuit board layout. We were impressed with the prototype's build quality (it's CNC machined), especially the design of the sliding mechanism used to capture the iPad. Production units are slated to be thinner, with flush PSP-like analog joysticks and two headphone jacks (instead of one). Battery life presently beats the iPad when blasting the built-in speakers, and stretches to several weeks (!) when listening with headphones.

Audojo currently integrates with Unity (with a package available in the Unity Asset Store) and provides a native Objective C SDK. The company is very interested in connecting with developers and is offering special packages ($600 and up) that include prototypes as part of its Kickstarter campaign. A few games already support the iPad gaming case, including 1948: Dawn of Future and Cowboy Guns (both available in the App Store) plus the Unity demo Angry Bots and the unofficial iOS port of Quake III -- it's even been used to control Parrot's AR Drone and Sphero. The accessory is expected to ship in July 2013 and retail for $99, but Audojo is making it available today on Kickstarter for $55 (first 200 backers) and up. Take a look at our gallery and hands-on video above, then follow the source link below to check out the campaign.

In this article: apple, Audojo, case, exclusive, gaming case, GamingCase, hands-on, iPad, joystick, Kickstarter, speakers, Unity, video
All products recommended by Engadget are selected by our editorial team, independent of our parent company. Some of our stories include affiliate links. If you buy something through one of these links, we may earn an affiliate commission.