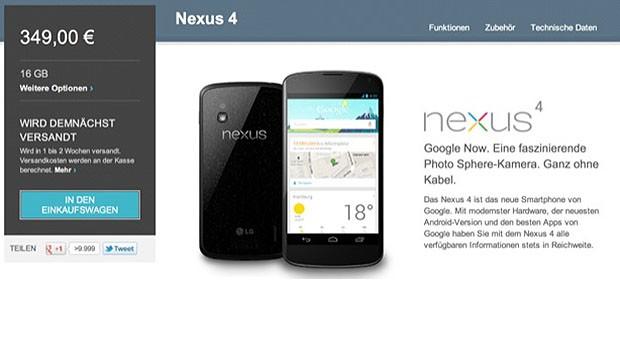 If the Nexus 4's recent scarcity has been making you want it even more, there's good news: it's now back on Google Play shelves. After a lengthy shortage resulted in a minor finger-pointing episode between Mountain View and manufacturer LG, the pair have starting restocking the popular quad-core, Android 4.2-pure device, on Play, well ahead of LG's February estimate. So far, it's only popped up in Germany, and there's no word yet on when they'll arrive elsewhere. Given the pent-up demand, however, you may want to grab one when it does.

Update: The Nexus 4 is now available through Google Play in the US as well! Hopefully other countries won't be far behind.

Update 2: Google isn't leaving out our northern friends, as Canadians can once again buy both Nexus 4 capacities.

In this article: Android, google, Google Play, GooglePlay, lg, Nexus 4, nexus4, Play, Play Store, PlayStore
All products recommended by Engadget are selected by our editorial team, independent of our parent company. Some of our stories include affiliate links. If you buy something through one of these links, we may earn an affiliate commission.