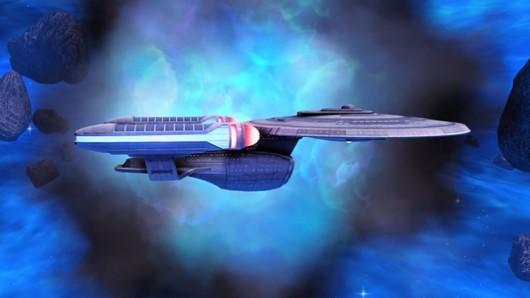 As you may have heard on our latest Massively Speaking podcast, Star Trek Online is on the verge of celebrating its third anniversary -- and the developers want to make sure that it's one that players won't soon forget. Cryptic Content Designer Charles Gray has the skinny on what Starfleet and KDF captains can expect in the coming days.

The ever-popular Q will show up to throw parties in Spacedock and Qo'noS from January 31st through February 14th. If you're willing to help Q out with a little assignment, he's supposed to reward you handsomely in return.

The big news is of the new featured episode that will be rewarding a souped-up version of the Ambassador Class or Kamarag Class starship if it's completed during the event. The episode centers around a strange anomaly that has connections with Tholian experiments and the 24th century. Time travel in Star Trek? Whoduthunk it! Cryptic says that it will deliver specs on the new ships soon.
In this article: ambassador-class, anniversary, charles-gray, cryptic, cryptic-studios, enterprise-c, event, f2p, featured-episode, free-to-play, in-game-event, party, perfect-world, perfect-world-entertainment, pwe, q, sci-fi, star-trek, star-trek-mmo, star-trek-online, sto, third-anniversary, update
All products recommended by Engadget are selected by our editorial team, independent of our parent company. Some of our stories include affiliate links. If you buy something through one of these links, we may earn an affiliate commission.