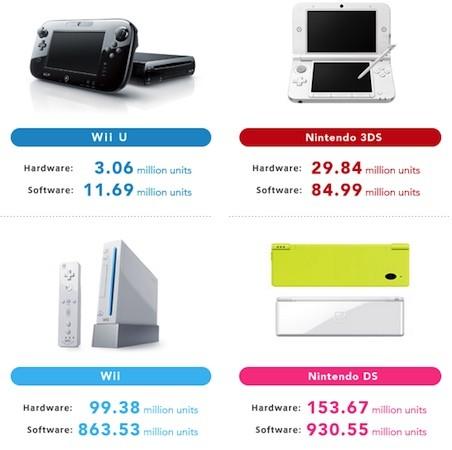 Nintendo's Q3 earnings report is out, and it's sold just over 3 million units of its new Wii U console (at a loss) along with 11.69 million pieces of software. The other big news is that it's adjusted sales forecasts downward -- again, after it announced they were being cut back in October. However, since the flagship console is sold at a loss, while Nintendo is predicting 17 percent lower revenue, its prediction for net income has actually moved up by eight billion yen ($87 million).

It's not all bad news however, as it's showing about $160 million in net income for the year, compared with last year's losses. The 3DS has jumped up to 29.84 million sold, while the original Wii is within shouting distance of the 100 million number. Need more numbers? Hit the source links to check out all the sales data firsthand.

In this article: 3ds, ds, earnings, hdpostcross, nintendo, q3, q32012, wiiu
All products recommended by Engadget are selected by our editorial team, independent of our parent company. Some of our stories include affiliate links. If you buy something through one of these links, we may earn an affiliate commission.