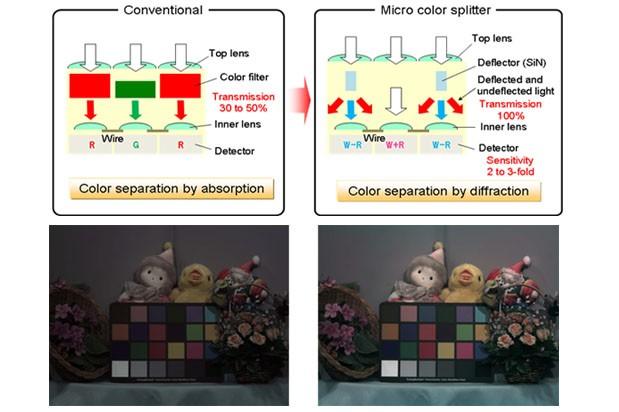 Panasonic has developed a new type of imaging sensor that gets more photons where they need to be by foregoing the use of conventional CMOS debayering filters. Those can reduce sensor effectiveness by blocking 50 to 70 percent of the light, so researchers developed "micro color splitters" to do the job instead, which can separate hues microscopically using refraction. They did it by taking advantage of wave optic principals to create a new type of electronic "deflector" that can analyze and separate light wave frequencies much faster than previous methods. There's almost no loss of light during the process, and such devices can be made using conventional semiconductor fabricating techniques, too. There's no timetable for commercializing the tech, but Panasonic holds 21 domestic and 16 overseas patents on it -- meaning it's likely not just a science project.

In this article: CCD, CMOS, colorsplitter, ImageSensor, Panasonic
All products recommended by Engadget are selected by our editorial team, independent of our parent company. Some of our stories include affiliate links. If you buy something through one of these links, we may earn an affiliate commission.