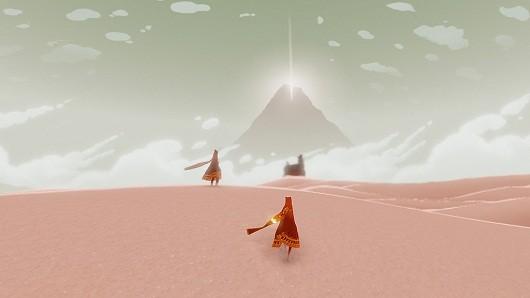 Austin Wintory's composition of thatgamecompany's Journey soundtrack earned him a Grammy nomination in the Best Score Soundtrack for Visual Media category, an accomplishment Wintory was shocked to achieve. It marked the first time a full video game score was recognized by the Academy, following Christopher Tin's win in 2011 with the song "Baba Yetu" from the Civilization 4 soundtrack.

Last night, Trent Reznor and Atticus Ross took home the Grammy for Best Score Soundtrack for Visual Media, for their The Girl with the Dragon Tattoo music. Wintory took the news in stride on Twitter, congratulating Reznor on the win.

"Obviously I didn't work on #JourneyPS3 hoping to win a Grammy," Wintory later tweeted. "The entire point was the game itself and that's gone beyond my wildest dreams." Journey won the top honor at the DICE 2013 awards and we were fairly fond of it as well. Good work, Wintory.
In this article: Austin-Wintory, grammy, grammy-awards, grammys, journey, playstation, ps3, ThatGameCompany
All products recommended by Engadget are selected by our editorial team, independent of our parent company. Some of our stories include affiliate links. If you buy something through one of these links, we may earn an affiliate commission.