Record-breaking 320-gigapixel panorama of London is a cause for celebration, vertigo 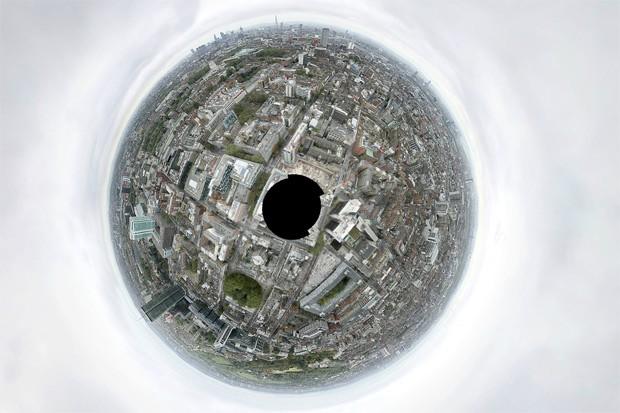 While the Shard might be the new darling of London's skyline, the BT Tower's still got a few tricks up its sleeve -- such as this record-breaking 320 gigapixel panorama of the English capital. In total 48,640 images, shot with four Canon EOS 7D cameras were stitched together to create this 360 vista. Want a little more perspective? The press info claims that if this were a physical image, it would be almost as large as Buckingham Palace -- or in more concrete terms -- 60,000 times larger than an average iPhone photo. Of course, what good would a gigapixel image be without a where's waldo-style hunt? So, UK residents who have a keen eye can try spotting BT's Buzby mascot for the chance of winning some prizes. Us? We're just trying to hunt down a cab. Set your sights on the source for big picture.

An amazing image of London taken from the top of the BT Tower has set a new record for the world's largest panoramic photo. The image shows a full 360 degree view of London in incredible detail.
The 320 gigapixel image, taken by expert photography firm 360Cities, comprises 48,640 individual frames, using four, state of the art Canon EOS 7D cameras with EF 400mm f/2.8L IS II USM lenses and Extender EF 2x III teleconverters, provided by Canon. The cameras were driven by high end Rodeon VR Head ST robotic panorama heads, from the Clauss company in Germany. The individual images have been stitched into a single, gigantic panorama over a period of weeks by a powerful Celsius R920 workstation, provided by Fujitsu Technology Solutions Europe.

It is the first time that an image of this magnitude has ever been attempted, and it took several months to create due to the scale of the endeavour. If printed at normal photographic resolution, the BT Tower panorama would be 98 meters across and 24 meters tall, almost as big as Buckingham Palace. In comparison, the last record attempt for a London panorama was 80 gigapixels, taken from Centrepoint in 2010.
The images were taken after the end of London 2012, the first digital Games. Londoners, tourists and those who work in the capital are now being asked to share their favourite views of the capital, as a permanent record of London's year in the global spotlight.

As the official communications services partner for London 2012, BT played a vital role in ensuring the Games were the most connected ever, with millions of people enjoying sharing their experiences of the sporting and cultural action via social media. BT Tower played its part in the celebration, sharing news of every single medal won, live stats and scores on its giant 360 degree LED screen.
Suzi Williams, director, BT Group Marketing & Brand, said, "The BT Tower is such an iconic London landmark, and became a focus for the capital's celebrations in 2012, what better way to capture that remarkable year than with a full panoramic photograph taken from its roof. This isn't just a world record for the BT Tower, it's for London and the people who live, work in or visit the capital. Take a look, and share your favourite London places and landmarks."

Steve Hercher, director, 360Cities, said, "We were honoured to be chosen by BT to attempt this world record panorama and make our own contribution to commemorating the wonderful London 2012 Games. So many unknowns and variables had to be addressed in the planning of this unprecedented shoot, really the first of its kind. Software and hardware were pushed to the limits, and rain, wind and other potential stumbling blocks had to be dealt with. Our photography team of Jeffrey Martin, Tom Mills and Holger Schulze did an amazing job and not a single individual frame from the more than 48,000 planned was missed."


Rainer Fuehres, Head of Consumer Imaging Group, Canon Europe, said: "The goal of empowering people to take the next step on their personal photographic journeys drives every product we create, and this breath-taking image truly takes this philosophy to the extreme. Since its launch, the EOS 7D has caught the imagination of enthusiasts around the world so we were pleased to support such an exciting and challenging project with a camera that so many people are using to capture their own moments of inspiration."

Also, our old friend Buzby is hiding in the gigapixel image too. Find him, and you could be one of three winners in our competition. People are selected at random, the first winner will receive an iPad, a year's free broadband, and a trip to the top of the BT Tower to see the view in person. Second and third place win an iPad. Full terms and conditions, please see http://www.btplc.com/gigapixel/

In this article: bt tower, BtTower, gigapixel, london, panorama
All products recommended by Engadget are selected by our editorial team, independent of our parent company. Some of our stories include affiliate links. If you buy something through one of these links, we may earn an affiliate commission.