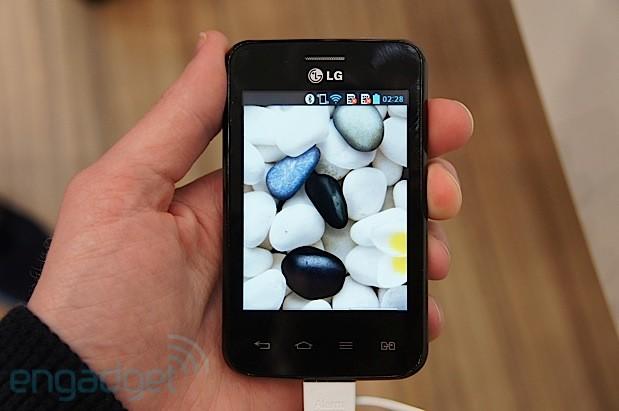 The blink-and-you-miss-it phone you see above is the LG Optimus L3 II, the smallest in the Korean manufacturer's trio of style-driven devices. Much like its predecessor, the L3 II is a 3.2-inch Android handset; the difference this time is the fact that it's running Jelly Bean, a firmware version that way too many larger smartphones -- even some new ones -- are still lacking. The twist here is that only Android fans with small hands and no need for raw processing power need apply, as there's only a Qualcomm Snapdragon S1 chipset (MSM7225) and 512MB RAM running the magic behind the show. Additionally, we were greeted by a QVGA (320 x 240) resolution, 3.15MP rear camera and 1,540mAh battery.

The fact that such a small phone with rather "budget-friendly" specs can run Jelly Bean without too much concern is a fact-check to manufacturers that claim their older devices can't be upgraded to it due to fears that it won't perform properly. Granted, the device was slower than we're accustomed to seeing on other Android 4.1 phones, but we have a feeling that it wouldn't be that much different a story if it were using Ice Cream Sandwich.

When it comes to the fit and feel of the L3 II, you probably won't be terribly surprised to learn that it wasn't terribly comfortable, though admittedly we're now conditioned to do hands-ons with phones as large as 5.5-inch (and even 6.1-inch). That said, its pebble-like form factor nearly got buried in our hands and it was difficult to see even the most trivial of apps, thanks to the vastly limited screen real estate. Still, we recognize that this particular size is designed to fit a very specific demographic, and it will likely delight anyone who is in the market for a smaller handset. Regardless of its size, the L3 II at least feels as if it's made with solid build quality. The white version offers a matte finish, while the black remains glossy -- and yes, a massively annoying fingerprint magnet. We also noticed that LG opted for an old-school four-button capacitive key layout here, a practice that has been dramatically reduced since Ice Cream Sandwich came around. The fourth key -- the furthest on the right -- takes advantage of the L3 II's dual-SIM capability, consisting of a toggle switch that lets you move from one of your SIMs to another. We're still waiting to hear final word of availability and pricing, but be sure to check out our full gallery and moving picture above while you wait in ever-so-anxious anticipation.

In this article: Android4.1, hands-on, JellyBean, l-seriesii, L3Ii, lg, lg optimus l3, LgOptimusL3, mwc2013, video
All products recommended by Engadget are selected by our editorial team, independent of our parent company. Some of our stories include affiliate links. If you buy something through one of these links, we may earn an affiliate commission.