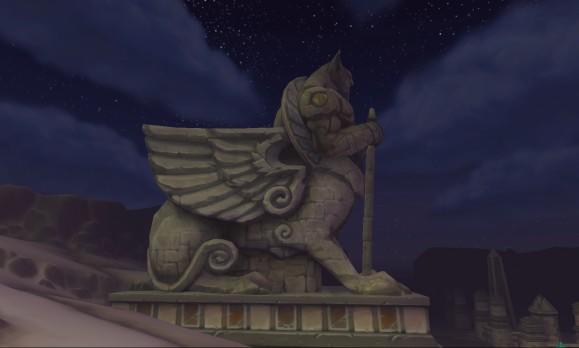 There's a bit of a rant at the end of today's Queue. Enjoy?

Are there new crafting patterns in 5.2? If so, what materials do they use? Will Blood Spirits still be useful for progression or only for catching up alts and new/returning players?

There are new crafting patterns, yes! Most of them are throwback transmog items crafted with the new Lightning Forge whatsit, using Lightning Steel Ingots, which are made with 10 Ghost Iron Bars each. However, there are some raid level crafted items with an ilevel of 522. Those don't use Blood Spirits anymore. Instead, they use the new raid item, Haunting Spirits.

Was just running Auchenai for some rep for lower city and noticed there were monks and clerics in there. Of course, we have monks now in game. Do you think they could make a cleric different enough from holy paladin and priest to bother with adding them as a playable class?

Probably not. Clerics lie somewhere between priests and paladins -- and in the lore of Warcraft, the clerics of the world stepped up to become the first paladins. Fielding clerics again would be something of a step backwards.

I am actually worried about the length of this expansion. We have patches coming out a tad faster than before, BUT Blizzcon is slated for November. This means that Blizzcon will announce the new expansion then and begin Beta process within 3 months at the very least. This means we have a full year of Mist ahead of us, which begs the question, how many patches will we get from Mists? up until 5.3? 5.4? will we even see a 5.5?

With patches coming out faster than before, and Blizzard breaking out of their routine of only releasing content when there's a new raid ready, we can't be sure how many patches we'll get out of Mists of Pandaria. Via developer chatter on Twitter, we know that patch 5.3 will be another non-raid patch, and they could keep producing patches like that to give us something to do while waiting for the next expansion. I sincerely hope they've learned not to leave the players to entertain themselves for an entire year waiting for the next expansion to come along.

Am I the only one who thinks Cataclysm was the best expansion? I know it receives a lot of flak for its disconnected zones and "not a lot to do" but personally I loved it and found myself playing more during Cata than any other expansion. Don't get me wrong, I love Mists and each expansion has its own merits, but I love just about everything about Cata including Goblins, Worgen, the revamped 1-60, Vashj'ir, Uldum, Hyjal, Deepholm, its talent system, the raids, the 5-mans, Deathwing...I do understand where people are coming from saying that there wasn't enough end-game content, but look back at everything Cata gave us. Also? The introduction of Transmog and Raid Finder. Not to mention Uldum and Vashj'ir are 2 of my favorite zones in the game. Of course it's all subjective, but I'm just really curious if I'm the only one that feels this way?

I'm sure you're not alone. I didn't hate Cataclysm, but I also didn't love it. I started out enjoying Cataclysm, because I was in a position of privilege to enjoy it. The heroics were pretty darn hard for PUGs through the dungeon finder early on, which I didn't realize because I had regular, stable guild groups for clearing dungeons. I was listening to so many players saying they were absolutely miserable and those dungeons and just couldn't grasp why. Then I started actually running those heroics through the dungeon finder ... yeah, every other group was a catastrophic failure. Anybody who didn't have guild groups for heroics started out that expansion at a disadvantage, so I couldn't blame them for hating it right off the bat.

Some of the zones were good. Some of them were pretty terrible. Since we're discussing our opinions here, I'm going to disagree with you on Uldum: I could not stand that zone. The constant cutscenes that served no purpose whatsoever, the bad Nazi jokes, the whole thing with it being an Indiana Jones gag ... look, I like pop culture references, I understand nerdy jokes, but the entire zone was a pop culture nerd joke. That's too much. And the pygmies?

World of Warcraft races often toe the line between culturally derivative and outright racist. The pygmies were pretty racist. They're designed to look like AC/DC roadies, but in Uldum, the writing for them was utterly vile. They were a straight up racist caricature. We beat them, caged them, and put them in a circus. Holy crap. That's something that was actually done to pygmy peoples in our world. We do some questionably moral things in World of Warcraft, but Uldum was a cesspit of that stuff and treated all of it as a big, dumb joke. There was no examining our actions, no undertone that maybe we should think about what we were doing -- no, we're hanging out with Indiana Jones, so let's be as racist as we want to be, and inflict bodily harm on Goblin Hitler's slave labor for funsies!

The flavor of the dungeons was solid. The Deadmines and Shadowfang Keep revamps were probably the best dungeon revamps they've ever done. I really enjoyed Deepholm, because it tickled that part of me that will fall completely in love with alien landscapes no matter what else is going on in a zone. Some of the old world zone revamps were just excellent, such as Swamp of Sorrows. Others were not so excellent, such as every zone where we thought the Alliance was actually fighting back against the Horde for once, but the story ended in horrific mass Alliance casualties. Seriously -- whether you play Horde or Alliance as your main character, go back and play through those revamped zones with an Alliance alt. There's a very good reason why Alliance players felt awful in Cataclysm.

The goblins were handled well and integrated fairly seamlessly into the Horde, minus that whole Thrall, why did you make our slavemaster our king? thing. The worgen were not integrated into the Alliance almost at all, and the continuation of their story arc is a Horde questline for whatever reason.

Have questions about the World of Warcraft? The WoW Insider crew is here with The Queue, our daily Q&A column. Leave your questions in the comments, and we'll do our best to answer 'em!
In this article: blood-spirits, cataclysm, haunting-spirits, lightning-steel-ingots, patch-5.2-crafting-recipes, patch-5.3, uldum
All products recommended by Engadget are selected by our editorial team, independent of our parent company. Some of our stories include affiliate links. If you buy something through one of these links, we may earn an affiliate commission.