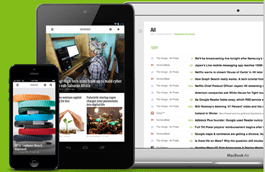 Feedly has quickly become the RSS feed-reading client to beat since the announcement of Google Reader's impending shutdown. Since Google's March 13 announcement, Feedly says it has seen over 3 million new users join the service. Fresh off an influx of new users, the service has announced new versions of its mobile client for iPod, iPad, iPod touch and Android.

For new users making the switch from Google Reader the process is simple: sign up for Feedly before Reader is gone on July 1 and your feeds will transfer over.

The updated app features an improved search engine which improved the speed of finding what you're looking for, and has over 50 million RSS feeds right to your device. It boasts an improved search algorithm that utilizes the searches of the entire Feedly community to find the most relevant feed results for your search.

In addition, the app has added a new feature called "Must Reads." Posts from the feeds you promote as "Must Reads" will be moved to the top of your feed panel and "Today" section.

Sharing has been improved with the addition of Google+ and the option to select which service will appear as the sharing shortcut in the main toolbar.

The update also removes the ability for users to search just their own feeds. This development has lead to many comments from chagrined longtime users on their official announcement blog. The company says the feature is too resource heavy for the current version and hopes to restore it in a future update.

TechCrunch is reporting Feedly is also finally addressing their long-term business model, one that will ultimately ask some users to pay for the service. In an email with Feedly cofounder Cyril Moutran, the executive implied they would be exploring a freemium model for power users. "We have also heard from our power users that they would like deeper integration with other services they use and pay for, like Evernote and Dropbox. We intend to launch a premium version of Feedly this year on a subscription basis that would include new features for power users."

The updated Feedly apps are available in the App Store.

In this article: Feedly, google reader, GoogleReader, iOS, iPad, iPhone, RSS, RSS reader, RssReader
All products recommended by Engadget are selected by our editorial team, independent of our parent company. Some of our stories include affiliate links. If you buy something through one of these links, we may earn an affiliate commission.
Share
Tweet
Share