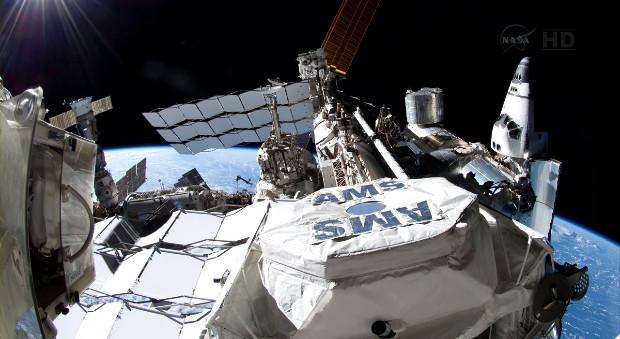 We've been waiting with bated breath all afternoon to find out what NASA, MIT and the Department of Energy has observed with the Alpha Magnetic Spectrometer. Well, we still don't quite understand the exact nature of dark matter, but highly precise measurements of positron fraction (the ratio of positrons to electrons and protons) do bring us a small step closer to proving the existence of the theoretical material. The AMS found a small excess of positrons coming from all directions instead of a single source. That could indicate the presence of dark matter, which is believed to generate the antimatter particles when it collides and annihilates itself. As usual though, this is far from conclusive. The excess of positrons could be caused by a number of cosmic phenomenon, including pulsars, but researchers are hopeful that further testing will narrow down the possibilities. Those of you hoping for direct and obvious evidence of dark matter may be a little disappointed, but let's be honest -- you were being overly optimistic. Besides, don't you want some mysteries left to solve? For more information, check out the PR after the break.

Until the launch of the Alpha Magnetic Spectrometer (AMS) experiment in 2011, scientists had compiled a mere anthill of information about the kinds of charged particles, or cosmic rays, that shoot around the universe. Two short years later, they have amassed an Everest-sized mountain of such information.

Using the power and data transmission capabilities of the International Space Station, AMS is circling Earth and sifting through matter, antimatter and other particles that are yet to be confirmed, 365 days a year. Scientists now are beginning to sift through that mountain of data and figure out how it may change our concept of the cosmos.

AMS collects its data by recording the number of particles that pass through its collectors; details on the kinds of particles passing through, such as protons and electrons; physical information such as particle charge, mass and velocity; and information on which direction they came from so that scientists can attempt to track down their source. Each one of these pieces of data is called a particle event. Since its activation on May 19, 2011, AMS has collected detailed information on more than 31 billion particle events and downlinked this data for analysis by AMS collaboration scientists on Earth. In its first six months of operation on the station, AMS had accumulated more data on charged cosmic rays than had been previously collected in the history of human physics studies. And AMS continues to gather data on about 1.4 billion particle events every month.

To do this, the 15,251-pound AMS and its eight primary science instrument systems use 300,000 data channels. The instruments are similar to those used in particle accelerators on Earth such as the Large Hadron Collider at the European Organization for Nuclear Research (CERN) outside of Geneva, Switzerland. The primary difference between the terrestrial-based instruments and AMS is that AMS' science instrument systems were miniaturized and ruggedized for launch on the space shuttle and operation on the space station.

AMS is operated from the ground by two full shifts and one partial shift at the AMS Payload Operations Control Center (POCC) at CERN. The daily partial shift is run from the AMS Asia POCC at the Chung-Shan Institute of Science and Technology in Taiwan. AMS data are downlinked using the space station's high-rate data system, the same one that is used to transmit television of astronauts living and working on the station. The data are sent from the orbiting outpost to NASA's Tracking and Data Relay Satellites, which relay it to the satellite reception dishes at NASA's White Sands Test Facility in New Mexico. From there, the data go to NASA's Payload Operations Integration Center at the Marshall Space Flight Center in Huntsville, Ala., and then on to the AMS Payload Operations Control Center in Switzerland.

The space station's solar arrays generate the electricity used by AMS, and they provide up to 1,780 watts of continuous power. That's a little more electricity than an average household on Earth uses continuously when averaged over time.

The AMS project began in 1994, when Professor Samuel Ting, a Nobel laureate from the Massachusetts Institute of Technology, was considering a new high-energy physics experiment. The concept of an international space station had just been announced in 1993, and Ting and his collaborators saw an opportunity for groundbreaking science in space. This group of particle physicists, called The Antimatter Study Group, published the concept for "An Antimatter Spectrometer in Space." The United States Department of Energy agreed to sponsor the project; NASA agreed to put it in space and the AMS team grew.

To prove the concept, an early version of AMS spent 10 days in space aboard space shuttle Discovery in 1998. The experiment ran for 103 hours and collected data for nearly 100 million cosmic rays. The data gathered provided the first accurate measurement of the composition of primary cosmic rays. From that experiment, seven scientific papers were published.

Work on the current version of the AMS began in 1998. It shipped to NASA's Kennedy Space Center in Florida in August 2010. Space shuttle Endeavour's STS-134 crew carried it into orbit in May 2011, where it was installed on the station's truss structure. It has been measuring particles ever since.

AMS is composed of a magnet and eight detectors that provide the scientists on the ground with information about the particles that travel through the magnet. All of the information is collected in the fraction of a second it takes a particle to travel through AMS.

Led by Principle Investigator and Spokesperson Samuel Ting of the Massachusetts Institute of Technology, the AMS team includes some 600 physicists from 56 institutions in 16 countries from Europe, North America and Asia. The various participants built their particular contributions, which were all integrated when the AMS was built at CERN.

During the STS-134 mission, and for the first several months afterward, about 40 members of the AMS team monitored the experiment and analyzed the data it sent down from the Payload Operations Control Center at NASA's Johnson Space Center in Houston. In July 2011, AMS operations moved back to CERN, where the AMS team continues monitoring and controlling the experiment 24 hours a day, with the capability to gather data for as long as the space station is in orbit.

For more information about the AMS experiment and collaboration visit:

In this article: AlphaMagneticSpectrometer, AMS, antimatter, darkmatter, DepartmentOfEnergy, mit, nasa, space
All products recommended by Engadget are selected by our editorial team, independent of our parent company. Some of our stories include affiliate links. If you buy something through one of these links, we may earn an affiliate commission.