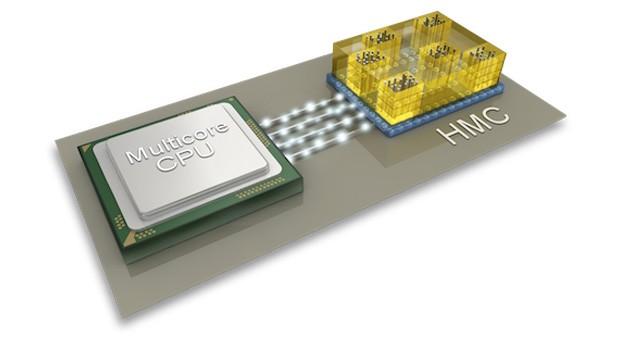 The Hybrid Memory Cube Consortium has been almost too patient in developing a standard for for its eponymous technology -- efforts began 17 months ago -- but it at last has more than good intentions to show for its work. Its just-published HMC Specification 1.0 lets companies build platforms and RAM with 2GB, 4GB and 8GB chips incorporating the stacked, power-efficient technology, all without compatibility jitters from other supporters. The completed spec is a scorcher when living up to its full potential, too. With eight links, a memory cube can reach a peak 320GB/s (yes, that's gigabytes) of aggregate bandwidth -- more than a hair faster than the 11GB/s we often get from existing DDR3 memory.

The Consortium is teasing us with more. Although we'll have to wait until the second half of the year before HMC 1.0 products appear in earnest, the Consortium already has a next-gen blueprint due in early 2014 that should nearly double individual data link speeds (from 15Gbps to 28Gbps). While we'd like to see the group walk the walk with real products before it talks more talk, there's still a chance that some memory performance bottlenecks could vanish for a good, long while.

A major breakthrough with HMC is the long-awaited utilization of advanced technologies to combine highperformance logic with state-of-the-art DRAM. With this first HMC milestone reached so quickly, consortium members have elected to extend their collaborative effort to achieve agreement on the next generation of HMC interface standards.

"The consensus we have among major memory companies and many others in the industry will contribute significantly to the launch of this promising technology." said Jim Elliott, Vice President, Memory Planning and Product Marketing, Samsung Semiconductor, Inc. "As a result of the work of the HMCC, IT system designers and manufacturers will be able to get new green memory solutions that outperform other memory options offered today."

"This milestone marks the tearing down of the memory wall," said Robert Feurle, Micron's Vice President for DRAM Marketing. "The industry agreement is going to help drive the fastest possible adoption of HMC technology, resulting in what we believe will be radical improvements to computing systems and, ultimately, consumer applications."

As envisioned, HMC capabilities will leap beyond current and near-term memory architectures in the areas of performance, packaging and power efficiency. One of the primary challenges facing the industry-and a key motivation for forming the HMCC-is that the memory bandwidth required by high-performance computers and next-generation networking equipment has increased beyond what conventional memory architectures can efficiently provide. The term "memory wall" has been used to describe this challenge. Breaking through the memory wall requires an architecture such as HMC that can provide increased density and bandwidth with significantly lower power consumption.

The HMC standard focuses on alleviating an extremely challenging bandwidth bottleneck while optimizing the performance between processor and memory to drive high-bandwidth memory products scaled for a wide range of applications. The need for more efficient, high-bandwidth memory solutions has become particularly important for servers, high-performance computing, networking, cloud computing and consumer electronics.

The achieved specification provides an advanced, short-reach (SR) and ultra short-reach (USR) interconnection across physical layers (PHYs) for applications requiring tightly coupled or close-proximity memory support for FPGAs, ASICs and ASSPs, such as high-performance networking, and test and measurement. The next goal for the consortium is to further advance standards designed to increase data rate speeds from 10, 12.5 and 15 gigabits per second (Gb/s) up to 28 Gb/s for SR and from 10 Gb/s up to 15Gb/s for USR. The next-generation specification is projected to gain consortium agreement by the first quarter of 2014.

In this article: hp, hybridmemorycube, HybridMemoryCubeConsortium, ibm, memory, micron, microsoft, ram, samsung
All products recommended by Engadget are selected by our editorial team, independent of our parent company. Some of our stories include affiliate links. If you buy something through one of these links, we may earn an affiliate commission.