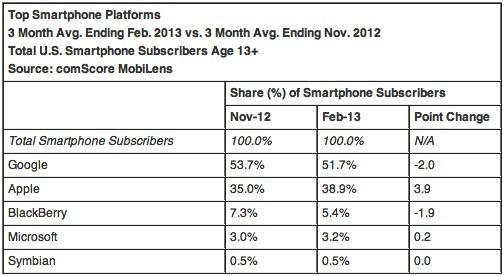 While there's no question that Android is thriving on the global scale, the situation is a little more complicated in the US when looking at ComScore's market share data for February. The platform is still comfortably ahead in the American smartphone sphere at 51.7 percent, but the figure represents the second consecutive dip in recent months, and roughly matches share that we saw back in June. Apple is headed in the opposite direction and appears to be the main beneficiary of Google's drop, albeit at a less-than-breakneck pace: the iPhone continued a gradual climb in February that put it at 38.9 percent. We're not surprised that BlackBerry declined once more in its last month before the Z10 reached the US, although Microsoft will be happy to hear that Windows Phone inched forward again to 3.2 percent.

Among individual smartphone makers, it's more of a familiar story. Apple's platform control gave it the lead at 38.9 percent, while Samsung at 21.3 percent was hovering roughly around the same share it had in January. As for everyone else? It's a bit ugly, to be honest. HTC, Motorola and LG all lost share in February, leaving the US firmly in a two-horse race. That said, we wouldn't be surprised if the market plays a different tune around April and May: with 2013 Android flagships like the HTC One and Samsung Galaxy S 4 just around the corner, there's room for a potential upset.

In this article: android, apple, blackberry, comscore, google, htc, iphone, lg, marketshare, microsoft, mobilepostcross, motorola, samsung, windowsphone
All products recommended by Engadget are selected by our editorial team, independent of our parent company. Some of our stories include affiliate links. If you buy something through one of these links, we may earn an affiliate commission.