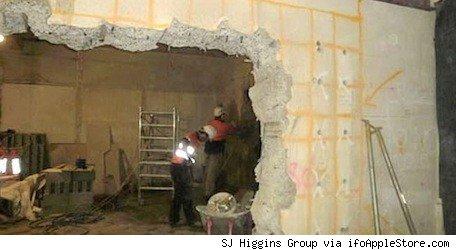 Apple is having a hard time Down Under these days. Recently a company executive had to appear before a Parliamentary inquest about why prices for its products are higher in Australia than in other countries, and now Apple has been ordered to pay for continued construction on a canceled Apple Store project.

The store in question is the MacArthur Chambers location in Brisbane, Australia. The project was renovating a 1934-era historic building, with massive work being done (see image above) to bring the structure to the standards for an Apple Store. However, the prime contractor on the project went bankrupt, and for some reason Apple pulled the plug last November. No work has been done since.

According to a source speaking to ifoAppleStore.com, a Queensland state court has ruled that Apple must pay for its portion of construction to be finished inside the space to what is referred to as an "end-of-lease handover" state. That would make the space available to the building owner so that they can lease it to another tenant.

In this article: Apple, Apple Store, AppleStore, Australia, Brisbane, ifoapplestore, Queensland
All products recommended by Engadget are selected by our editorial team, independent of our parent company. Some of our stories include affiliate links. If you buy something through one of these links, we may earn an affiliate commission.