Broadcom gives up on Qualcomm buyout after Trump veto 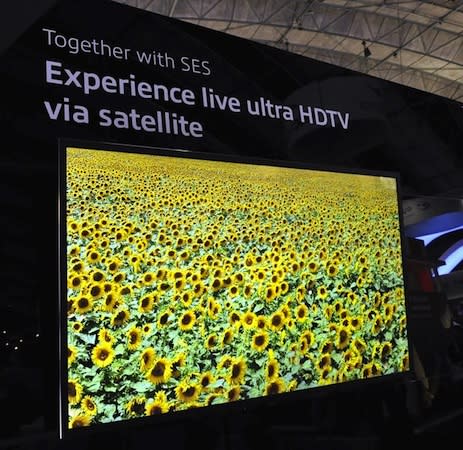 We're still a bit away from Ultra HD becoming the standard for television. One of the things standing in the way is just how much bandwidth pushing that many pixels demands. SES recently demonstrated an Ultra HD transmission that uses the up and coming HEVC (High Efficiency Video Coding) standard, as opposed to the more established H.264. It's demonstrated 4K broadcasts before, as seen above at its IBC booth last year, but those were using older codecs. The 3,840 x 2,160 image was broadcast at a data rate of 20 Mbps, roughly a 50-percent improvement in encoding efficiency over H.264-based MPEG-4. The demonstration was performed with support from SES's partners, Harmonic and Broadcom, the latter of which provided the BCM7445-based decoding box used for pulling in the video. The tech still isn't quite ready for prime time, but we'd say a 4K House of Cards stream is probably closer than any of us realized.

Luxembourg, April 19, 2013 - SES (NYSE Euronext Paris and Luxembourg Stock Exchange: SESG) announced today that, together with its partners Harmonic, the worldwide leader in video delivery infrastructure, and Broadcom Corporation, a global leader and innovator in semiconductor solutions, it has pioneered the first Ultra HD transmission in the new HEVC standard live from an ASTRA satellite at 19.2 degrees East. The HEVC standard features an up to 50 percent encoding efficiency improvement, compared to previous test broadcasts in MPEG-4 AVC (H.264).

The end-to-end demonstration which was presented at the SES Industry Days in Luxembourg used Harmonic's ProMedia Xpress and a HEVC decoder reference-design system based on Broadcom's BCM7445 device for receiving HEVC encoded Ultra-HD television transmission. The signal was broadcast in DVB-S2 using a data rate of 20 Mbit/s.

The live demonstration for the first time broadcasts a full 3840x2160 pixel Ultra HD picture in HEVC, while previous demonstrations were either broadcast in H.264 or using 4 HD pictures in parallel. SES first live-broadcast a full 3840x2160 pixel Ultra HD picture using the MPEG-4 AVC (H.264) standard at IBC 2012.
Thomas Wrede, VP Reception Systems, SES, said: "We are very proud to present the first Ultra HD demo in the HEVC standard on satellite. SES has once again taken a leadership role in the industry by broadcasting the first real Ultra HD picture in a commercially realistic bandwidth. We are convinced that the HEVC standard will become the option of choice for TV operators broadcasting Ultra HD content and expect the industry to develop prototype Ultra HD receivers in the coming months. With this initiative SES will be significantly driving the Ultra HD ecosystem forward and provide a 24/7 test channel to its industry partners."

"Broadcom is working to advance the adoption of HEVC technologies - and ultimately the distribution of UltraHD content - with SES," said Joseph Del Rio, Broadcom's Associate Product Line Director, Broadband Communications Group. "HEVC is the catalyst that will drive UltraHD television with its telepresence-like resolution to consumers."

About SES
SES is a world-leading satellite operator with a fleet of 52 geostationary satellites. The company provides satellite communications services to broadcasters, content and internet service providers, mobile and fixed network operators and business and governmental organisations worldwide.
SES stands for long-lasting business relationships, high-quality service and excellence in the broadcasting industry. The culturally diverse regional teams of SES are located around the globe and work closely with customers to meet their specific satellite bandwidth and service requirements.
SES (NYSE Euronext Paris and Luxembourg Stock Exchange: SESG) holds participations in Ciel in Canada and QuetzSat in Mexico, as well as a strategic participation in satellite infrastructure start-up O3b Networks. Further information under: www.ses.com.

In this article: broadcom, Harmonic, hdpostcross, HEVC, SES, ultrahd
All products recommended by Engadget are selected by our editorial team, independent of our parent company. Some of our stories include affiliate links. If you buy something through one of these links, we may earn an affiliate commission.