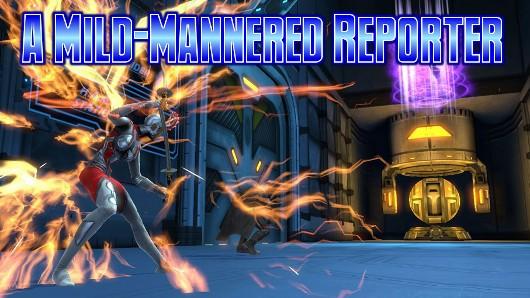 DC comics has always had a history of patch jobs. It's inevitable, really, since DC is both older than Marvel and replete with characters inherited from other publishers or characters originally designed to work in a vacuum. The fact that we've had multiple multiverse-spanning events that completely rewrite the fabric of the universe within the comics makes it clear that this is not a franchise afraid to retroactively remake an entire character only to change said character back in another remake four months later.

It sometimes makes DC rather painful to read even without the mess that the New 52 became, but that's a different article on a different site. Right now we're talking about DC Universe Online getting in on the whole parallel reality game.

Why the preamble? Because this was always pretty much inevitable given the franchise. That having been said, there's some interesting stuff within the upcoming Origin Crisis DLC that bears discussion, so let's talk about the upcoming DLC and how it ties into the game as a whole both thematically and mechanically.

Adding in a new tier of content is always a tricky proposition when you don't have more levels to go along with it. The more powerful characters become with each tier, the higher the challenges need to be on the next tier -- and the more intermediate steps that someone needs to work through in order to get up to speed and see the new stuff. Luckily, DC Universe Online has been fairly good about going back and making it easier to reach the "competent" level for new endgame content, so what could be a confused mess is... less so.

In terms of mechanics, though, it's nice to see SOE play with the idea that players can determine how they want to progress and how they want to fight at the highest end of the game, which makes a game of "fight the big bosses" far less tedious than it could be. You have to think about what's going to be the hardest challenge and how to minimize that impact while dealing with some random factors. It's not ground-breaking, but it's comfortably evolutionary given the game's other concepts.

As for the parallel universes, I can't help but be a bit sad that we get Steam-Powered Batman and not Steam-Powered Luthor, since I want to see that steampunk monstrosity like yesterday. The actual Batmen and Luthori that we got seem a bit tame in places; GCPD Batman and Ninja Batman are down the street from regular Batman, and I could easily see Lex going from scientist to general to cyborg in the course of a story. But it does get across the idea that these people are tweaks on existing characters.

On a related note, no Red Son? Darn it.

I love almost everything about the idea of playing as iconic characters in a single endgame operation. I love the cheekiness of it, I love the solo nature of it, and I love that it's as viable as any other endgame habit. What I don't like is the game's choice of whom you're playing as.

Bizarro makes sense; he's cool. Even if you aren't familiar with the character through years of comics, the idea of an inverse Superman is pretty easy to grasp immediately. But then on the hero side you have... Huntress. Who is neat, and who has some interesting angst, but really, she requires a lot of knowledge of Batman and points related before she makes sense as a character.

I can see the appeal of having her in there, since she's almost like Batman... but there are a lot of people who are almost like Batman. Considering that there's a very real possibility that we won't ever get another challenge along these lines, it's like having a Transformers game where you can play as Shockwave or Landfill. Or a Marvel game allowing you to play as Doctor Doom or the Scarlet Spider.

But that's nitpicking. For all I know Huntress will play so well that my cruel words about her are all for naught. Let's hope so. Besides, changing her origin story could conceivably still result in Huntress, compared to changing, say, Tim Drake's origin story. (He sought out Batman, so let's see if he's still Robin if he... er... doesn't?)

If you've longed for the ability to don an Aquaman costume, well, I suspect you to be wholly fictitious. But you'll be able to do so as a hero. Or you can pick up a Booster Gold costume on both factions, which seems like a better option, because Booster Gold is awesome. (Just ask him.) Not that this is a vital element of the game, but getting to tweak your appearance a bit more is always nice.

Assuming the Quantum set works as it's designed -- I haven't observed it yet, so I can't say for certain -- it'll expand the control options of the game a little bit. While I admit my thoughts on this point are sort of broadcast from Theoryland, the Control options do seem to lack much in the way of really startling powers compared to the other group roles. It certainly implies that we'll see another set of tanking and healing powers, but it might just be a chance to buff up a less-attractive role.

I disagree with some of the thematic choices, but leaving that aside I'm excited for this content as a whole even if it will be a while before I can see it (which is a problem with many games, not just DCUO).

Feedback can be left below or via mail to eliot@massively.com as in previous weeks. I am writing this while sick, so please, avoid sending me mails asking for samples of my blood. Next week, there's going to be another roundup.

In this article: a-mild-mannered-reporter, add-ons, console, consoles, dc-universe, dc-universe-online, dcuo, dcuo-origin-crisis, dlc, endgame, endgame-content, f2p, featured, free-to-play, legendary-pve, mild-mannered-reporter, opinion, origin-crisis, patches, playstation-3, playstation3, ps3, soe, sony-online-entertainment, superhero, superhero-genre, superheroes
All products recommended by Engadget are selected by our editorial team, independent of our parent company. Some of our stories include affiliate links. If you buy something through one of these links, we may earn an affiliate commission.