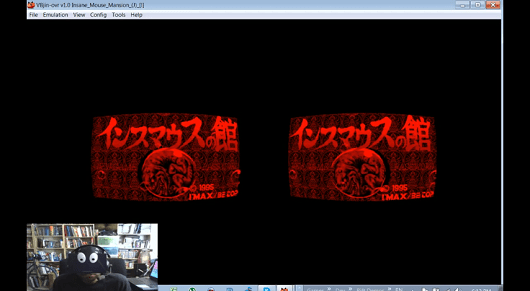 While the Oculus Rift is currently the world's great hope for a future lived inside digital spaces, it's not the first stereoscopic box developers have asked us to cram our faces into. For most of us, that honor goes to Nintendo's Virtual Boy, herald of vectorized headaches (in 3D!) to 700,000 or so hopeful people with $180.

If you're one of the lucky people with an Oculus Rift development kit, however, you can now recreate that ol' black-and-red magic with VBjin-ovr, a freeware Virtual Boy emulator for the Oculus Rift. As seen in this video from YouTuber Cymatic Bruce, wherein VBjin-ovr is used to play the obscure first-person survival horror game Insane Mouse Mansion, the Rift primarily functions as a head-mounted display, as Virtual Boy games have no use for the device's various bells and head-tracking whistles.

Still, the experience seems about as accurate as one could hope for without the real deal. Is there an Excedrin emulator out there?
In this article: emulation, Insane-Mouse-Mansion, Oculus-Rift, pc, VBjin-ovr, Virtual-Boy
All products recommended by Engadget are selected by our editorial team, independent of our parent company. Some of our stories include affiliate links. If you buy something through one of these links, we may earn an affiliate commission.