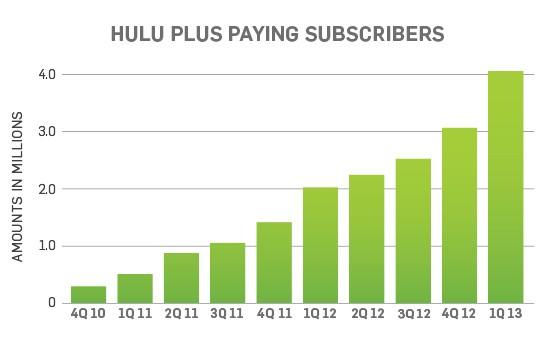 Hulu's future ownership may be in question, but the video streaming site is apparently doing fairly brisk business on the paid subscription front. During an advertiser event this morning, the site announced that it has managed to double its Hulu Plus accounts in the past year, up to four million. The site's revenue also hit a record for the first quarter of the year, though Hulu's not giving out any numbers. As with rivals Netflix and Amazon, the company's making a big bet on original programming, with a number of exclusive series, including the animated The Awesomes and western Quick Draw.

NEW GROWTH STATS SHARED AT THE HULU UPFRONT
· Subscriptions to Hulu Plus, our ad-supported subscription service, doubled in 2012. In Q1 2013, Hulu Plus surpassed 4 million subscribers. In the same quarter, Hulu set new records for revenue.
· Today, Hulu reaches millions of TV fans on more than 350 million connected TVs, smartphones, game consoles, and set top boxes (not including PCs).
· In Q1 2013, for the first time ever, Hulu viewers streamed more than 1 billion content videos in a single quarter.
· Hulu is #1 in engagement among top ad supported online video sites. Hulu viewers stay with us for 45 minutes per session - without fast-forwarding or skipping ads.
· Hulu is also #1 in market share of all premium online video providers, delivering 1 in 3 of all premium video ads in the US.
· Mobile is growing at an incredible rate, and will account for approximately 15% of Hulu's consumed videos in 2013-2014. For context, this sort of viewing was nonexistent on our service only two years ago.
· Living room viewing is now 29% of content consumption, and 80% of Hulu Plus subscribers have watched with someone else.

HULU STATS-AT-A-GLANCE
· Revenue: $695 million in 2012
· Subscribers: Hulu Plus, our US subscription service, exceeded more than 4 million paid subscribers in Q1 of this year.
· Content Partners: There are more than 470 content partners on Hulu and Hulu Plus. Hulu Plus is the only online video subscription service that offers current season content from 5 of the 6 largest U.S. broadcast networks, including The CW and Univision. We offer a broad selection of exclusive titles from around the world – Korea, Japan, the UK, Australia – as well as the most robust offering of premium Spanish language content in the US through Hulu Latino.
· Content library: We are continually adding to the content available on Hulu and Hulu Plus. As of March 2013, we have:
o Approximately 57,000 hours of content on Hulu and Hulu Plus (and growing)
o More than 70,000 full TV episodes on Hulu and Hulu Plus
o Nearly 2,500 TV series on Hulu and Hulu Plus
· Advertisers: Hulu continues to lead the online video advertising market, with the largest market share of a rapidly expanding market. We have now served over 1,000 brand advertisers in our company's history.
· Distribution: Hulu is available on more than 350 million connected TVs, smartphones, game consoles, and set top boxes, in addition to computers.

In this article: hdpostcross, hulu, hulu plus, HuluPlus
All products recommended by Engadget are selected by our editorial team, independent of our parent company. Some of our stories include affiliate links. If you buy something through one of these links, we may earn an affiliate commission.