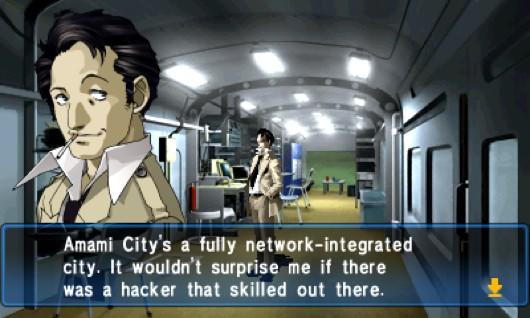 In recent years, Atlus' string of portable-bound RPG remakes has done an excellent job of showing off the developer's history with video games before the breakout success of Persona. Yes, if you're the type of person inclined to read a column dedicated to Japanese RPGs, you might be thinking, "Breakout success? But I've loved Atlus for years!" If that's true, then you probably remember an ugly past, making mandatory reservations thanks to the tiny quantities of Atlus games that once trickled into your local Gamestop – if they did at all – and the wallet-destroying eBay markups greeting those who didn't go to Herculean lengths just to buy a retail product.

As a result of the developer's growing fame, we're now seeing the release of games we only dreamed about playing in the 90s, and Atlus has tried their best to replicate the experiences we would have had back then – for better or worse.

More than any other genre, it seems as though JRPGs have a terrible way of aging. Some, like Dragon Quest, had the luck of coming into this world fully realized and with a great deal of foresight, so falling back into them feels natural. But pick a game from the genre's awkward, teenage, 32-bit years – which coincidentally overlapped with many of our own – and you'll often find a lumpy, misshapen mess that's complex for the sake of complexity. Shocking confession: I somehow finished Vagrant Story back in 2000, but if I had to pick it up again, all the tedious menu-diving and weapon-switching would be too much for my distractible adult brain to handle. But, in those days, figuring out the arcane mechanics of a JRPG era felt like cracking a safe: a shining moment of satisfaction after sweaty, prolonged tension.

Atlus made their biggest splash in the United States by further streamlining and simplifying (though not necessarily dumbing down) the various mechanics of their Shin Megami Tensei series with Persona 3, and even more so with Persona 4. I devoured these games, and immediately took more of interest in the SMT back catalog, which had never been a particular interest of mine. The year 2010 brought us the PSP remake of the original Persona, which I grabbed just to see how Atlus would revamp the first chapter of the series for a new group of fans who never had a chance to play this rare release. Turns out, they really didn't.

As much as I wanted to play the entire Persona series, the first installment struck me as clunky and dull – a sin magnified by the brightness and breeziness of Persona 4. Sure, it had a sleek, new package, with fully animated cutscenes, a vastly improved localization, and a completely remixed soundtrack, but the beating heart of the Persona remake remained 32-bit. After dealing with those same mechanics in a much more accessible format for hundreds of hours, playing through Persona 1 revealed its lack of appeal.

At the same time, I can't blame Atlus for making their remakes so low-impact; even with increased awareness on the part of consumers, something titled Shin Megami Tensei: Devil Summoner: Soul Hackers has relatively limited appeal. And a few years after getting burned by the first Persona, I managed to jump into Soul Hackers with measured expectations. Though, to be fair, the game couldn't have come out at a worse time in Atlus history, sandwiched between Etrian Odyssey IV and Shin Megami Tensei IV, two games of the first-person dungeon crawler category that have the benefit of 15 years of hindsight.

Still, there's a certain charm to Soul Hackers' crusty, old FMVs that manage to be extra off-putting in the way that all old FMVs are off-putting. Datedness happens to be baked into the game's very nature; Soul Hackers' story weaves a speculative vision of the Internet's future from a mid-90s perspective, which, of course, involves VR, virtual malls, and all of the other technology we found too embarrassing to continue developing. It's a snapshot of a strange, exciting time, one where anything seemed possible thanks to computers – no matter how stupid.

Along with its presentation, Soul Hackers' core gameplay remains mostly unchanged, though Atlus has added a few options – which kind of feel like Game Genie codes – that completely turn off one of the many mechanics eventually abandoned in the Persona series. Even with this assistance, it's hard not to look over at my Persona 3 and Persona 4 boxes mournfully as I flail my way through Soul Hackers. Though the latter's conversation system – a SMT staple in which you can talk to your demon enemies to recruit, bribe, offend, or cause them to react in some unexpected way – offers alternative to fighting, picking the "right" answer often feels completely arbitrary. And even if you convince a demon to join your side, they tend to ignore your actions and will even abandon you entirely if they get bored of defending themselves in the back row. In comparison, Persona 3 and Persona 4 use a card conceit to eliminate the finicky nature demons from the series altogether, and only ask you to play a simple mini-game for your reward.

I can hear the grumbles, and I understand them: Soul Hackers is intended to be a different flavor of SMT than Persona, and should be treated as such. Since so many elements of the game hinge on the difficulty of communicating with demons, eliminating one mechanic for the sake of simplicity could cause the whole thing to fall apart. So it makes sense that Atlus only allows you to dummy out a few minor, cumbersome features, though the most beneficial subtraction only eliminates one minor barrier you might not have even noticed in the first place. Soul Hackers has a dorky, hopeful earnestness about technology that I absolutely love, but again, the sheer goodness of Persona 3 and Persona 4 has me wishing I could see this goofy story play out in a more accessible format. It's so hard to not tap that Etrian Odyssey IV icon on my 3DS's home screen when it's so close to the Soul Hackers one – whoops, did it again.

What do we all want to see from a JRPG remake? Speaking as a purist who cried every time Nintendo injected screeching character voices into their Game Boy Advance ports, I tend to prefer the experience as it was originally intended – God help you if you harm a hair on A Link to the Past's head. But after you've been spoiled by terrific RPG design, it's hard to go back; I don't think I've made it past Midgar during any of the last three or four times I tried playing through Final Fantasy VII again. What should be kept, and what should be thrown to the wolves? Let's hash this out before someone gets hurt.

Bob Mackey is a freelance writer based out of Berkeley, California. Since 2006, he's written a semimonthly column for the comedy website Something Awful, and his work has been featured on outlets such as 1UP, Gamasutra, Electronic Gaming Monthly, and Cracked. You can follow him on Twitter at @bobservo.
In this article: Atlus, devil-summoner-soul-hackers, Japanese-RPGs, JRPGs, Opinion
All products recommended by Engadget are selected by our editorial team, independent of our parent company. Some of our stories include affiliate links. If you buy something through one of these links, we may earn an affiliate commission.