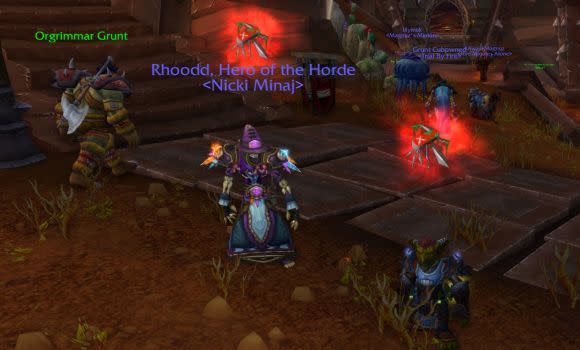 Tricks of the Trade is a strange ability for rogues. Why would we sacrifice our own damage (by spending energy) to boost the damage of someone else? Aldriana and Pathal have both spoken out against TotT's misguided benevolence and its boring mechanics. Rather than being a situationally-useful ability that we pull out when the time is right, TotT has become a set-and-forget chore that we just auto-cast on the second-highest DPS in raid.

Lore issues aside, Tricks of the Trade is a pretty good ability. Used properly, it can greatly accelerate the rate that tanks pick up aggro, which makes dungeons and raids just a bit easier. While it's a DPS loss for the rogue casting TotT, it's a net gain for the raid's DPS, and that's a sacrifice that we'll have to make. It's also incredibly potent in PvP; granting an ally a 15% damage boost is a pretty big deal.

One of the biggest issues with Tricks of the Trade is that rogue UIs aren't typically designed with the casting of beneficial buffs in mind. I know plenty of rogues that play with their raid frames turned off, and Clique definitely isn't one of the standard rogue addons. In order to use TotT effectively, we have to be able to cast it quickly and without changing our target. A combination of macros and addons are the best way to go about doing that.

If you're looking for the most versatile TotT macro, the standard mouseover is a good place to start:

/cast [@mouseover] Tricks of the Trade

Just roll your mouse over someone's raid frame and hit the button. You probably want to keep this macro around for special situations (all of your normal TotT macro targets are dead). If you use Tricks of the Trade without any macros, it will either cast it on your current target (not good since it means you're not attacking the boss) or it will bring up a cursor where you can click on someone (not good since it requires another push).

Another simple dungeon macro is the targettarget version:

/cast [@targettarget] Tricks of the Trade

This will cast TotT on your target's current target, which should be the tank if you're targeting the boss. I don't really like this macro as you never know when the boss will target someone with a random ability or when someone else will steal aggro.

If you're playing with a fixed group of people, you should have a set of addons specifically for giving them TotT quickly. In a raid situation, you'll want to have macros for both tanks and one or two DPS players. In an arena group, you'll want to at least cover your partner in 2v2 or both teammates in 3v3. I suggest picking two or three similar buttons for this. I use V, shift-V, and ctrl-V for my 3 main TotT macros. Here are a few of my different macros for raiding:

The reason that you want macros for both tanks is that you'll often be tasked with assisting a particular tank at gaining aggro quickly. A great example is Horridon, where tanks often take turns tanking the smaller mobs that leak through the door. You need to alternate your TotTs between tanks, and having a separate macro for each tank will make it easy to direct traffic. During the last burn phase, you'll want to be pouring your TotTs to a DPS class instead.

When I'm just running 5-man dungeons for a few hours in random groups, I don't want to go in and edit the name in one of my macros for every random tank that comes my way. It's even more trouble if the tank has funny characters in her name. Instead of doing a specific target macro, I use my focus target to handle it. The focus target is like a second target that you can have, which is persistent. So you "focus" the tank in the group, and you can then cast spells on your focus without switching your main target. First, use a simple focus macro while you have the new tank targeted:

You only have to do that once at the start of the run. If you're really crafty, you can add "mouseover" to the end of the "/focus" command to focus whoever your mouse is currently over. Once you set your focus, you can use this macro to cast TotT on that focused target for the rest of the run:

/cast [@focus] Tricks of the Trade

I don't bother with putting TotT on the other DPS classes in dungeons, as the tank is usually dealing quite a bit of damage and it helps with aggro issues. If you're focusing on defeating a difficult challenge mode dungeon, that's a different story.

I have also used an addon called TargetRole to simplify my dungeon and LFR macros. You create a macro like one of these:

Once you have made the macros, you register them with the TargetRole addon, which will keep them up to date. It will automatically put in the information for the tank (or tanks, in LFR) and update it as players join and leave. Now your macros always work and you don't have to remember to use your focus macro every time.

Handling all of these buttons

Obviously you don't want to be dealing with a mouseover macro, 10 or more static macros, a focus macro, and a handful of TargetRole macros all at the same time. Imagine how many hotkeys that would eat up! I personally use Dominos to save several different TotT bars, and I use a hotkey to roll through the bars for each situation.

My arena TotT bar has my static arena partners, my raiding TotT bar has my normal tanks, and my LFR TotT bar has the generic TargetRole macros. You could also use the low-tech solution by just keeping a bar of spare macros and dragging the ones you need into your hotkeyed slots when necessary.

Don't forget to have a few macros set up for when you want to suicide into a pack of mobs while some unsuspecting victim is AFK:

/cast [@David] Tricks of the Trade