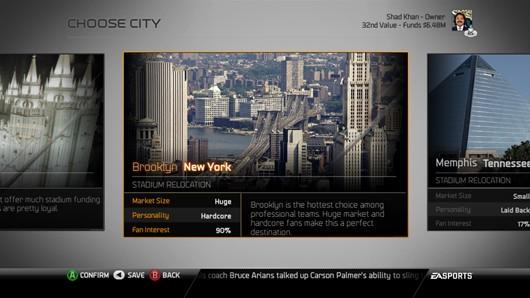 Additionally, some locations with an already-established NFL presence can receive a second team, such as Chicago and Houston. Players will have the option to retain their team name, logo and uniforms when moving or select from three different preset options for each city, including the Brooklyn Beats. The mode also grants players the option to reboot now-defunct teams from the NFL's history, such as the Columbus Panhandles, London Monarchs or the Houston Oilers. Players can opt to turn off the team relocation feature, disabling the option entirely.

EA Sports provided us with a new trailer for the game in which Young discusses the move from Madden 13's Connected Careers mode to this year's Connected Franchise mode. Madden 25 will launch August 27 for PS3 and Xbox 360.
In this article: connected-franchise, ea, EA-Sports, ea-tiburon, Electronic-Arts, football, madden, madden-25, madden-nfl-25, microsoft, mike-young, playbook, playstation, producer-video, ps3, relocation, team, trailer, trey-wingo, xbox
All products recommended by Engadget are selected by our editorial team, independent of our parent company. Some of our stories include affiliate links. If you buy something through one of these links, we may earn an affiliate commission.