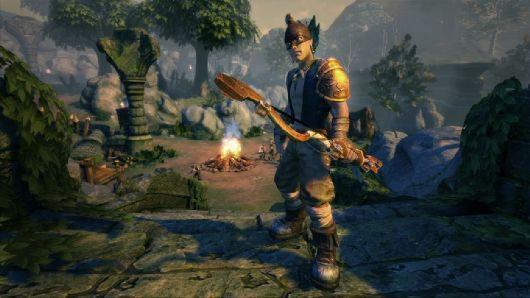 Update: Xbox's Major Nelson announced Fable Anniversary, coming "holiday this year" for Xbox 360. As expected, it's a HD remake of the first Fable and its Lost Chapters expansion. Speaking to the Major in a podcast, Lionhead's Ted Timmins noted improvements to the user interface, loading times, controls, and save system in the remake, as well as a visual update up to "360-quality level." Fable Anniversary also features SmartGlass integration, as well as leaderboards for an array of things, one of which is chicken-kicking.

As teasers go, this one's as blunt as a war hammer. Going by it, Lionhead Studios is set to unveil an Xbox 360 HD remake of the first Fable and its The Lost Chapters expansion.

The vid shows various tweets directed at Lionhead requesting the remake. One asks for "better graphics and sound quality," while another makes mention of "Fable Anniversary." The original Fable launched on the Xbox in September 2004.

4
In this article: fable, fable-anniversary, fable-the-lost-chapters, Lionhead-Studios, microsoft, xbox
All products recommended by Engadget are selected by our editorial team, independent of our parent company. Some of our stories include affiliate links. If you buy something through one of these links, we may earn an affiliate commission.