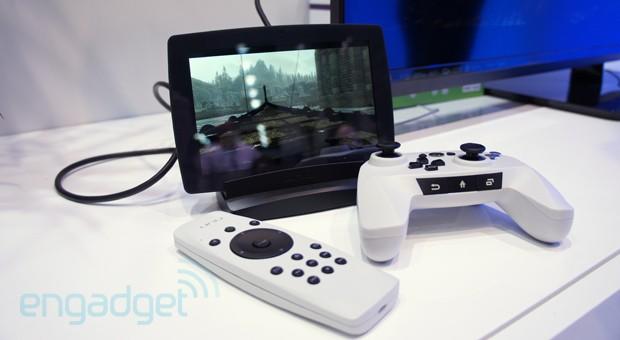 Another Android gaming console at this year's E3? Kind of, sort of, yeah. But Unu's (née Snakebyte) looking to set itself apart from the OUYAs, Gamesticks and M.O.J.O.s of the world (to name but a few) by becoming the "Swiss Army knife" of the space. The device isn't so much a console as tablet that plugs into your TV, meaning that you can do pretty much whatever you can do on a standard Android slate (which, arguably, you can also do with Mad Catz's device, but we digress).

The tablet itself runs Android 4.2, display through a seven-inch, 1280 x 800 IPS screen. The rear sports a brushed aluminum surface and a 5-megapixel camera (with a 2.0 module on the front). Inside, you've got 8GB of storage and a 1.6GHz quad-core chip. Unu does Bluetooth 4.0 and has two micro-USB ports, a microSD slot and, most importantly, a mini-HDMI port, which lets you turn the thing into a living room console of sorts, by connecting it to your HDTV. If you're feeling fancy, you can go in for the docking station, which does video out and charging -- and also props the tablet up nicely, so you can watch the same thing on two displays at the same time. The Unu ships in two configurations, both of which include the tablet, dock, HDMI cable and a remote. The higher end Gaming Edition also adds a carrying case and a wireless game controller. Like the tablet itself, the controller and remote are still in the early stages, and the company promised to add a little weight to the plasticky controller. The remote is two-sided, with navigation buttons and devoted Android keys on one side. On the other, you'll find a QWERTY keyboard. The controller features two analog sticks and triggers and a trio of Android buttons on the bottom. The Android UI has been skinned for easier navigation with these input devices, but both were conking out a bit. Using the remote as a motion-controlled mouse was fairly frustrating -- something the company blamed on the system's beta status and the bombardment of wireless interference on the show floor.

All said, there doesn't seem to be a lot separating the Unu from the competition, though the company's pick up and go approach to plugging into TVs could have some appeal for larger households. The price isn't too bad either, at $200 for the base Media Edition and $250 for the Gaming edition. Both will be available later this summer.

In this article: android, console, e3, e3 2013, E32013, tablet, unu, video
All products recommended by Engadget are selected by our editorial team, independent of our parent company. Some of our stories include affiliate links. If you buy something through one of these links, we may earn an affiliate commission.