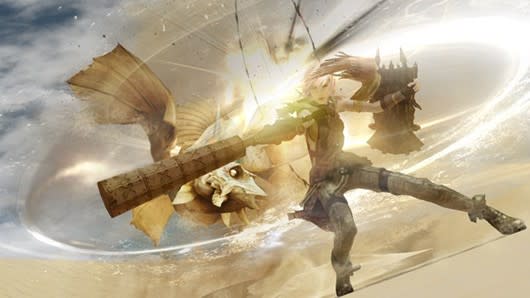 No development process has been as interesting to watch than the multi-game pile-up known as Final Fantasy 13. It's not that these RPGs have been of poor quality, per se; they just represent the totality of Square Enix's resource mismanagement during the first HD generation of consoles. So it shouldn't come as a surprise that Lightning Returns wasn't the only Final Fantasy 13-related product on the show floor during E3 2013, as Square unveiled the long-awaited Versus 13 under an entirely new (though slightly predictable) name: Final Fantasy 15.

This rebranding – combined with the Final Fantasy 13 name getting second billing to its lead character – provides some compelling evidence that the developer might be a little ashamed of that "lucky" number these days.

Despite their many problems, the two 13 games to date feature an excellent battle system that feels a lot more like a puzzle game than an RPG. While it might be a bit too automated, 13 and 13-2's Paradigm Shift – which tasks the player with switching characters in and out of battle – adds some much-needed excitement to your typical turn-based action. So my disappointment was palpable when I found out Lightning Returns would revamp Paradigm Shift into something that works best with the game's party of one. Based on the small slice I played at Sony's booth, it's an awkward fit.

RPGs typically don't demo well. For as much as you'd love to be dropped right into the thick of things, coming to terms with a host of complex mechanics can often take dozens of hours, so that leaves developers with no option outside of presenting the basics. Still, if you're not familiar with 13's Paradigm Shift, Lightning Returns might seem baffling at first glance. As with the previous games, Lightning Returns' battles revolve around switching to the right class at the right moment – though, this time around, Lightning can jump between different classes on the fly, which each providing its own unique attack and a defensive maneuver. Since the demo presented nothing but the most brain-dead of enemies, I had more than enough freedom to experiment with the many options the game presented.

Though it certainly plays a lot of lip-service to the subgenre, Lightning Returns doesn't really feel like an action-RPG. You might not select attacks and abilities from a menu, but you might as well; free movement, at least in the battles I encountered, didn't seem to matter an iota, even in terms of avoiding attacks. Battles take place in distinct arenas, though Lightning's new ability to roam around them freely didn't affect much of anything for me. If I strayed a bit too far from a monster before starting an attack, Lightning would simply clear the distance on her own. A handy shortcut, yes – but it only adds to the game's illusion of agency.

Additionally, the Stagger system seen in the last two 13s – where causing enough damage over time puts your enemy into a near-defenseless state – has been made much more inelegant. It's still there, but it now relies on Lightning taking advantage of her enemies' weaknesses. Switching one character between different classes didn't offer the same amount of strategy as figuring out the best trios in 13 and 13-2, and Lightning's different forms felt indistinct in my brief time with the game.

Granted, the demo didn't offer any options for character customization, and I imagine opening up new classes provides plenty of opportunities to plan out what works best. But Lightning Returns' biggest issue has absolutely nothing to do with my inexperience, and everything to do with how the 13 series now treats its main character. To put it simply, she's been sexualized, and while that's not an uncommon occurrence in the world of video games, Final Fantasy used to treat her in a fairly respectable way. In Lightning Returns, the formerly dignified lead character now sexily slides down poles, and while her new outfits could be a lot worse, the camera tends to linger uncomfortably on certain areas, delivering a lion's share of sideboob, underboob, and upskirt shots. (There's really no polite way to say that, is there?) In a medium with so few strong female protagonists, it's depressing to see Lightning reduced to such a state.

I still have hope that the demo merely misrepresented what could be a fine RPG, but Lightning Returns' lukewarm battle system and unnecessary sleaziness filled me with even more disappointment for a developer I used to treasure. With Lightning Returns, I at least hoped Square could stick the landing of the rocky flight they've taken these past three years. Now I can only pray they don't explode on the tarmac.
In this article: lightning-returns-final-fantasy-xiii, microsoft, playstation, ps3, Square-Enix, xbox
All products recommended by Engadget are selected by our editorial team, independent of our parent company. Some of our stories include affiliate links. If you buy something through one of these links, we may earn an affiliate commission.