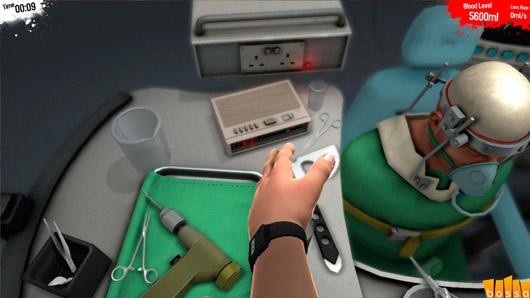 In Surgeon Simulator 2013, players attempt vital organ transplants from a first-person perspective using an intentionally awkward control scheme. It suffices to say that if you're squeamish, head-tracking and motion-sensing peripherals won't make the experience any less nauseating.

The peripheral-enhanced version of Surgeon Simulator 2013 will be playable at Rezzed 2013 in Birmingham on June 22 and 23. An update adding official support for the Oculus Rift and Razer Hydra will be released to the public "soon."
Show full PR text
YOU'RE NOT GOING TO BELIEVE YOUR EYES. BE NIGEL, ON OCULUS RIFT!

London, 17 June 2013 - Bossa Studios announced today that Surgeon Simulator 2013 will soon support the hotly anticipated Oculus Rift™ and the Razer Hydra®, taking surgery to the next level of mayhem and creating the most immersive operating theatre experience ever. In addition, the game will be playable with the hardware at the Rezzed Show at the NEC in Birmingham on June 22 and 23 2013.

Released on Steam in April 2013 at £6.99 (or equivalent), Surgeon Simulator 2013 has quickly become nothing short of a phenomenon. The original prototype – developed in just 48 hours at the 2013 Global Game Jam in January 13 – challenged players to complete a heart transplant using a combination of keyboard and mouse actions, armed only with an arsenal of clumsy and inappropriate tools and a hapless hand that was diabolical to control.

Set to release soon and with development kits already with Kickstarter backers, the Oculus Rift allows players to step into game. It was one of the big hits at this year's E3 show in Los Angeles, impressing the audience with its stereoscopic 3D experience and a huge field of view.

For additional information on the game, please visit the following links:

London-based Bossa Studios is led by a team of veterans from the worlds of gaming and entertainment. Proud creators of BAFTA-winning Monstermind, and the BAFTA-nominated Merlin: The Game, Bossa Studios has revolutionised the social gaming market. Its achievements of developing and publishing innovative games resulted in it being awarded the Develop Excellence Award for best 'New Studio' in 2012. As part of Shine Group, the Studio is also developing new transmedia experiences.
www.bossastudios.com
In this article: bossa-studios, indie, pc, surgeon-simulator-2013
All products recommended by Engadget are selected by our editorial team, independent of our parent company. Some of our stories include affiliate links. If you buy something through one of these links, we may earn an affiliate commission.