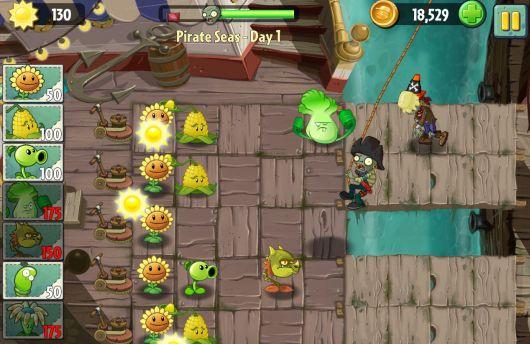 PopCap Games is known for making games that appeal to a mass audience, and perhaps none are more so than Plants vs. Zombies. The cute 'n clever tower defense game has connected with players of all ages and origins. A sequel, then, was inevitable, and after an announcement last year we finally got to see the game in action at E3 last week.

It's unfortunate, however, that much of the discussion around Plants vs. Zombies 2: It's About Time, at least during the game's iOS launch, probably won't be around any of the great new content. There are new zombie enemies, new plants, three new worlds set in different time periods, touchscreen-centric powerups that allow you to throw zombies around or pinch them apart, and even a new "plant food" buff that gives each plant an extra burst of ability when used.

At launch, they'll probably all get lost in the mix, because there's one other big difference between the first Plants vs. Zombies and its sequel: PvZ 2 is a freemium game.


The first game was the very definition of a successful premium title, where players paid once and then got access to the full release, in addition to extra updates. But PopCap is convinced (and probably rightly so) that there's a bigger audience in giving the game away for free, and that there's a substantial, sustained profit source in selling extra currency and plants via in-app purchases.

Plants vs. Zombies 2 is a more refined, complex recreation of the first game. Crazy Dave, it turns out, has a time machine, and he takes you around to fight zombies in three different worlds, based on Ancient Egypt, a pirate-infested Caribbean, and the Wild West (there's also a future-based world that will be added to the app sometime after launch). Each of the worlds includes modes from the first game, so each area has its own standard levels, harder challenge levels, and an endless level that will pit you against waves of the incoming undead, allowing you to choose a plant army for each.

New plants are unlocked as you go along, and of course there are new variants, like a pea shooter that you can replant a few more times for extra cannons, and a "bonk choi" that will engage enemies in melee combat. Zombies will now occasionally drop "plant food," which can be fed to any individual plant to temporarily power it up, boosting the strength, firing rate, or other powers for a short time. There are also new elements in the maps themselves, like paths that open or close, and period-specific zombies with different tricks.

As cool as those new elements are, the freemium issue surrounding Plants vs. Zombies 2 always creeps back into the conversation. In addition to the new plants in the campaign, there are "premium plants," which can only be purchased with real money if you ever want to use them. The stars required to unlock each world can be earned by beating levels, or can simply be bought right away. Plant food can be purchased, which should make for an interesting balance when it comes to topping each level's leaderboards. And the special power-ups, that allow you to interact with zombies directly on the touchscreen, have currency amounts right on them, so it's very clear that whenever you use one you're spending earned (or purchased) coins.

Of course, those freemium elements don't necessarily hurt the game, and, indeed, more casual players might not even notice them on the screen. Making the game free does open it up to a larger audience, and keeping in-app purchases flowing will allow PopCap to justify more content for a long time to come.

But these in-app purchases do add a different feel to a game that has always been a prime example of a quality premium title, generally untouched by requests for more spending after that initial purchase.

Plants vs. Zombies 2 marches out to iOS later this summer and, if PopCap's history with this franchise is any indication, we'll likely see it on more platforms soon after that.
In this article: e3-2013, ea, freemium, ios, ipad, iphone, mobile, plants-vs-zombies-2, popcap, popcap-games
All products recommended by Engadget are selected by our editorial team, independent of our parent company. Some of our stories include affiliate links. If you buy something through one of these links, we may earn an affiliate commission.