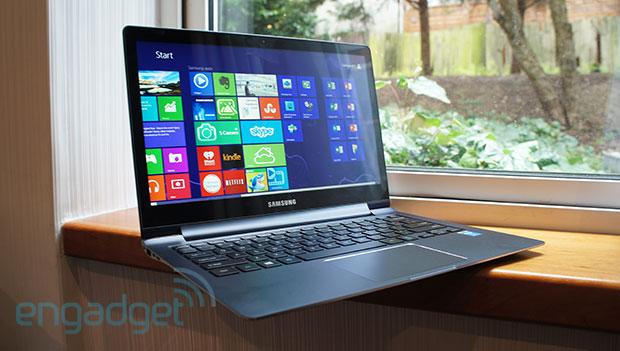 Samsung's long since decided to rebrand its Series 9 series as ATIV Book 9, but it's only now that it's got some new Ultrabooks to show off. While the ATIV Book 7 unfortunately jumped the Haswell gun, the higher-end ATIV Book 9 Plus is happy to benefit from those impressive battery savings we've already seen from Intel's next-generation chips. In fact, Samsung is promising 12 hours of usage -- and that's despite the Plus model arriving with an eye-watering 13.3-inch, 3,200 x 1,800 QHD+ display. In addition, there's up to 256GB SSD storage and 8GB of RAM, two USB 3.0 ports and mini-VGA and micro-HDMI sockets. The screen is protected by a layer of Gorilla Glass and, alongside adding touch functionality since the previous Series 9 Ultrabook, Samsung has crafted a new hinge for its latest flagship, offering two stop-points. Moving the screen through to a standard 105- to 110-degree pitch, the screen strongly resists. Better still, there's really not that much give as we tapped our way through Windows 8. However, give it more of a sustained push, and the screen bends down to a flat 180-degree position, making it easier to show the screen around a table.

It's joined by the humbler Book 9 Lite, with a lower (though unspecified) price. Powered by an unnamed 1.4GHz quad-core processor and housing up to a 256GB SSD drive, it promises a cold-boot time of eight seconds, or two seconds from sleep. It's the same size screen (13.3 inches) as the Plus model, but resolution drops down to 1,366 x 768 -- a noticeable difference when you observe the two side by side. Turn them off, however, and the interiors of the two machines are so similar that even the most hardened Samsung exec might be fooled (excepting for that Intel sticker on the high-end model). On the outside, though, the systems remain noticeably different. The Book 9 Plus gets a moody, matte finish to its aluminum unibody, while the Book 9 Lite has a glossy plastic surface. The cheaper Lite model reminds us of the finish on Samsung's Galaxy smartphone series, but it'd be great to see Samsung bring this other, cooler finish to more products. Both Ultrabooks are expected to land in the US (and elsewhere) in time for back-to-school season. Check out the gallery below, and follow past the break for more impressions. Perhaps unsurprisingly, Samsung's high-end laptop captured most of our attention. Changes since the 1080p Series 9 iteration don't stop at the screen and CPU. Samsung says it's improved the keyboard's backlighting system (though we weren't able to give this an entirely thorough examination during our time playing with it under artificial lighting). In addition, the trackpad now has better palm rejection, an adjustment that makes lots of sense on a touchscreen Ultrabook like this. The trackpad left us just as impressed as we were with the ATIV Book 7. Also, there's a slimmer locking port than there was before.

Moving on to the ATIV Book 9 Lite, it will arrive in white and black color options, and largely the same design. Its 16.9mm-thick profile isn't quite as thin as the Plus (13.6mm), and it's heavier too: 1.44kg vs. 1.39kg for the Plus. So, not so Lite after all. (Sorry.) There are also USB 3.0 and USB 2.0 ports, as well as the same micro-HDMI and Mini-VGA output found on the Book 9 Plus. An extra on the Lite, however, is a 3-in-1 card reader, while the Book 9 Plus will have to make do with only an SD slot. Typing on both laptops was pleasant enough; Samsung has increased the travel on its keys, while the trackpad on the ATIV Book 9 Lite was just as capable as the Plus iteration.

In this article: ativ, ativbook9lite, ativbook9plus, hands-on, haswell, samsung, samsungpremiere2013, ultrabook, windows8
All products recommended by Engadget are selected by our editorial team, independent of our parent company. Some of our stories include affiliate links. If you buy something through one of these links, we may earn an affiliate commission.