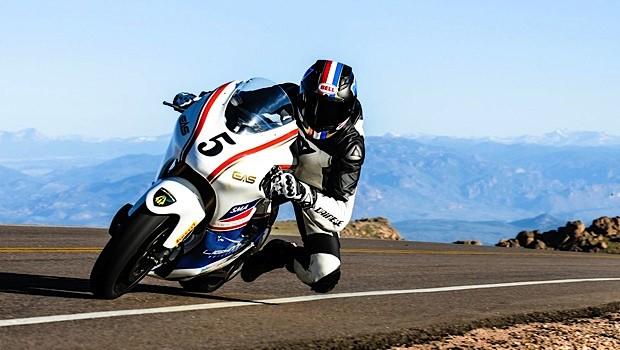 With 156 turns over its 12.42-mile (19.99 km) course and elevation changes ranging from 4,720 ft (1,440 m) to 14,110 ft (4,300 m), Pikes Peak International Hill Climb is one of the most grueling races in the world for both humans and machines. It's particularly challenging for gas-powered vehicles, since the air contains less oxygen at higher altitudes. As a result, electric cars and motorcycles have gained popularity at the event in recent years. In fact, 2013 marks the first time an electric bike's beaten its gas-powered rivals, with Carlin Dunne and Lightning Motorcycles finishing the race in 10 minutes and 0.694 seconds -- ahead of Bruno Langlois who managed 10 minutes and 21.323 seconds on a Ducati Multistrada 1200 S. While electric vehicles are expected to dominate Pikes Peak in the near future, it's going to take a few more years before autonomous cars win the event.

In this article: Carlin Dunne, CarlinDunne, electric, electric motorcycle, ElectricMotorcycle, entertainment, gear, hill climb, HillClimb, Lightning, Lightning Motorcycles, LightningMotorcycles, minipost, motorcycle, Pikes Peak, Pikes Peak 2013, Pikes Peak International Hill Climb, PikesPeak, PikesPeak2013, PikesPeakInternationalHillClimb, PPIHC, timeline16evspeed, transportation
All products recommended by Engadget are selected by our editorial team, independent of our parent company. Some of our stories include affiliate links. If you buy something through one of these links, we may earn an affiliate commission.