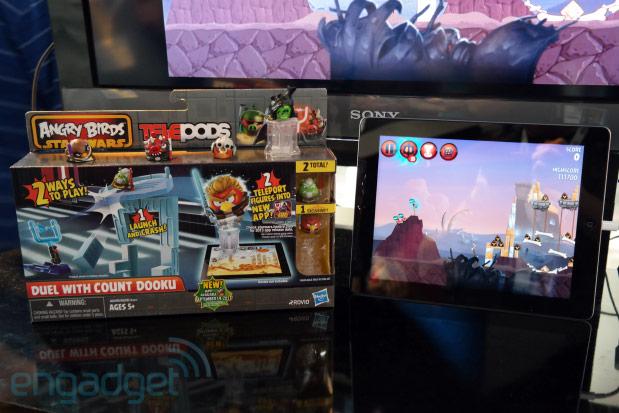 Rovio recently announced a sequel to its Angry Birds Star Wars game, and the Finnish company was on hand to demo its latest title here at Comic-Con. Coming to Android and iOS on September 19th (and to consoles a month later), the app features more than 30 playable characters and -- most notably -- works with Hasbro-designed "Telepods." If you've heard of Skylanders -- not to mention Hasbro's zAPPed line of add-ons for iPad games -- the concept will be quite familiar: the Angry Birds Star Wars 2 Telepods give players access to additional characters and superpowers.

To get started with the Telepod figures, we simply had to place them (attached to their plastic stand) over the demo iPad's camera. The tablet recognized the characters in just a second or two, and then we were able to play with new birds and their associated abilities (hint: more explosions). Rovio's VP of marketing Philip Hickey says the Telepod collaboration with Hasbro allowed the company to make even Jar Jar Binks' character interesting -- and we have to admit, that's quite an accomplishment. The Telepods will be available in stores for about $20 shortly before game launches in September.

The live-action telepods may be the upcoming title's most novel feature, but that doesn't mean the game doesn't have several software-based goodies as well. You can choose to play on the dark side ("on the pork side," as it were), and there are new two-player cooperative and two-to-four-player multiplayer modes. Be sure to check out our video hands-on after the break to see the sci-fi birds in action. In this article: angry birds star wars, angry birds star wars 2, AngryBirdsStarWars, AngryBirdsStarWars2, hands-on, hasbro, Rovio, telepods, video
All products recommended by Engadget are selected by our editorial team, independent of our parent company. Some of our stories include affiliate links. If you buy something through one of these links, we may earn an affiliate commission.