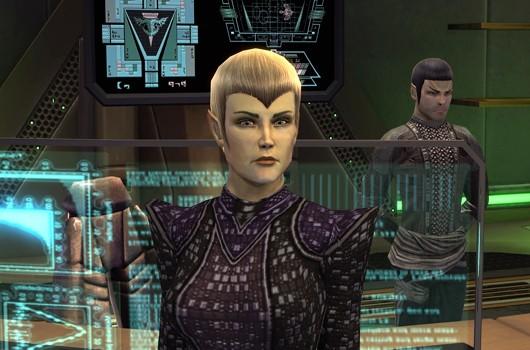 I recently had the opportunity to travel to Northern California and stop by and spend some time with the Star Trek Online team at Cryptic Studios. This week I continue my series of interviews with the team with part two of my conversation with Star Trek Online Executive Producer Daniel Stahl.

Take a leap past the break and read more about what Stahl had to say about the new trait system, what a new level cap raise might entail, and his own involvement with writing new story content for the Klingon faction!

My conversation with Stahl continued with a question from read Ben Willow (Excalibur), who pointed out that The Legacy of Romulus has seen improvements to character customization in the form of the trait system. Willow wanted to know whether there are there any plans to revisit the itemization system (slots used by players to fill items that provide specific statistics?), and to that, I added a query about what the new trait system has done for the game and whether or not Stahl believes it might lay the foundation for future changes to the game.

Stahl told me that part of the goal of the new trait system is to allow players more customization options and focus on their favorite type of gameplay and statistics. He told me that the devs aren't forgetting that they are making an MMORPG; the changes to the trait system allow for more of the "RPG" to come into the game and give players more opportunity to make their characters feel special. He said that the company has always taken pride in customization choices. In fact, he mentioned Lead Designer Al Rivera's desire to add more customization to kits.

Cryptic is looking for ways to integrate even more choices and customization for all of the equipment that has become a part of Star Trek, from utility kits to tricorders. He said the show was replete with equipment used by the characters that helped the audience define the character's purpose -- like Dr. McCoy's special medical tricorder versus a tricorder that might be used by an engineer like Mr. Scott.

I asked Stahl about his personal wishes and desires for the Gateway system. But he warned me that his personal wishes may not be what the design team eventually comes up with, and he didn't necessarily want to rain on those designers' parade. However, he told me that there's currently no real concept for players to command a fleet of ships under their earned admiralty. One of the things he would like to pursue with the Gateway is letting folks have an admiral feel like an admiral.

Stahl posed the question to me: How can players use a fleet under their command? He said that when he looks at some of the objectives in the game, he sees potential for how some of those ships that are just sitting in dry dock can be used. As an admiral, a player will still receive orders from command, but under Stahl's imaginings, the player would be able to assign a captain to one or more of the ships in his fleet and then send that ship out to fulfill the objectives. And how does the crew assigned to a specific type of ship and the gear it has affect the result coming from that? Stahl thinks that that much of what makes an admiral can be handled in the game and in tandem with Gateway. Again, he reminded me that this is all pretty much "pie in the sky dreaming and that none of this is currently in development," but it's interesting to hear about all the same.

Another question from MadJack asked about a potential level cap raise. Stahl explained that Cryptic had thought about doing the level cap raise in the new season release but ultimately is choosing not to "just arbitrarily" raise the level cap -- the studio wants to have a really good reason to do so. A lot of what he was talking about in regard to admiral-level gameplay is tied to a level cap raise. He opined that endgame works only when there's a lot to do at endgame. "My big fear is that we'll raise the level cap and then there's nothing to do," he said. He also noted that one of the reasons behind the implementation of the reputation systems was to give players "alternate advancement" with more skills, abilities, and powers as well as a sense of character growth without a boosted skill cap. "When we do raise the skill cap," he said, "it has to be a big deal."

I moved the conversation back toward the Legacy of Romulus expansion and asked him about his involvement with the story that was revealed in the Klingon faction's overhauled tutorial and low-level missions. Stahl admitted that he was involved with the "Alexander stuff." As Cryptic was developing the LoR expansion, he explained, the team really wanted to provide the Klingon one through 20 levels as part of the expansion, but the studio was running out of time and resources because the Romulan content was taking up the bulk of personnel. He told me he "kind of went running" with it on his own, coming in to work on the Klingon material on his off-hours. He said he began working on material that was exciting to him because he's such a big fan of the Klingons and that the story he began to develop kept him passionate enough to keep going.

Stahl admitted that he was intrigued by the "bread crumb" that was left by the appearance of the character K'mtar in the Star Trek: The Next Generation episode Firstborn. After discussing his ideas for the K'mtar character with the team's contact at CBS Studios, he was allowed to run with the idea that the character came from a period of time synchronous with the STO universe. Stahl said he was excited about being able to give some more depth to K'mtar's story. He admitted that Worf never really was a good father and yet had some very palpable ideas of what he wanted for his son. Stahl said he wanted to flesh out whether or not Worf would end up getting what he wanted out of his child.

Stahl told me he really had a lot of fun playing with the idea of what you can or cannot change about the future and what sacrifices might be necessary in order to stand up for someone who's only trying to be true to himself. Stahl's plans for the story were approved, and (without spoiling what happens for those who have not played the new Klingon content!) we were treated to one of the more surprising elements in STO story-telling.

There is still more to come in my interview with Daniel Stahl, so catch part three next week! Until then, live long and prosper!

Incoming communique from Starfleet Headquarters: Captain's Log is now transmitting direct from Terilynn Shull every Monday, providing news, rumors, and dev interviews about Star Trek Online. Beam communications to terilynn@massively.com.
In this article: alexander, captains-log, cryptic, cryptic-studios, customization, daniel stahl, expansion, f2p, featured, free-to-play, Gateway, gateway system, kits, klingon, kmtar, legacy of romulus, opinion, perfect-world, perfect-world-entertainment, pwe, sci-fi, star-trek, star-trek-mmo, star-trek-online, sto, traits, worf
All products recommended by Engadget are selected by our editorial team, independent of our parent company. Some of our stories include affiliate links. If you buy something through one of these links, we may earn an affiliate commission.