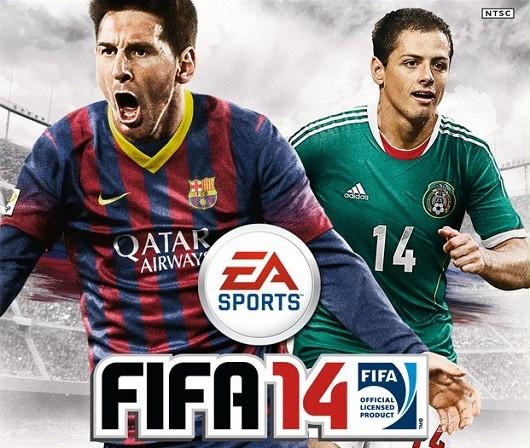 When you think about soccer, FC Barcelona is one of the teams that likely comes to mind, especially because its forward, Lionel Messi, is arguably the best player in the world and co-cover athlete for FIFA 14. EA Sports certainly recognized this when it announced this morning that it settled on a three-year exclusive agreement to become the "official video game partner" of the soccer club. With the partnership in place, EA captured 3D head scans of 17 Barcelona players for use in FIFA 14.

Meanwhile, Konami recently announced an agreement to bring 20 soccer teams from the Argentinian Football Association to Pro Evolution Soccer 2014. The license isn't on an exclusive basis according to Konami's announcement. The list of 20 AFA teams to be officially licensed (featuring correct kits, logos and team colors) for the game can be found after the break. Local Argentinian Fox Sports announcers Mariano Closs and Fernando Niembro will also be included in the game.
Show full PR text
EA SPORTS Joins F.C. Barcelona as Official Video Game Partner

REDWOOD CITY, Calif.--(BUSINESS WIRE)-- Electronic Arts Inc. (NASDAQ:EA) and F.C. Barcelona today announced they have agreed to a three-year partnership that will make EA SPORTS™ the Exclusive and Official Video Game Partner of one of the most popular and storied soccer clubs in the world.

"Joining a world class soccer club like Barcelona as an Official Club Partner is a fantastic opportunity for EA SPORTS and our fans," said Matt Bilbey, Senior Vice President and Group General Manager, EA SPORTS. "We will create a deeper connection with their passionate, global fan base, and use our games as a platform to engage supporters all around the world for years to come."

Jordi Moix, board member in charge of the Economic and Strategic Area (Patrimony) at F.C. Barcelona said, "We are delighted to have the opportunity to partner with EA SPORTS, one of the world's leading sports and entertainment brands, and to create a stronger relationship between our global fan bases. We encourage everyone to try out the game, get a feel for being under the skin of our players and emulating their actions on the pitch; without a doubt those who try it will enjoy it."

Through the partnership, EA SPORTS captured 3D head scans of 17 F.C. Barcelona stars such as Xavi Hernandez, Gerard Piqué, Cesc Fàbregas, Dani Alves, and Andrés Iniesta, and they will appear as stunning, high-quality and authentic 3D digital player models in FIFA 14. In addition, Camp Nou, Barcelona's home pitch, will be a featured stadium. F.C. Barcelona and its superstar forward and FIFA 14 cover athlete, Lionel Messi, will become central figures in global marketing, advertising and social media activities for the critically acclaimed FIFA franchise. Plus, F.C. Barcelona will host an exclusive videogame tournament later this year to determine the best FIFA 14 player on the squad.

Over the course of the partnership, F.C. Barcelona and EA will develop a range of interactive activities to entertain and engage fans both at Camp Nou and around the world. At selected home matches over the course of the season, the EA SPORTS Dugout, a mobile gaming trailer, will be on-site so fans can play EA SPORTS games. In addition, F.C. Barcelona will receive in-game insights and data about how their fans engage with the club through EA SPORTS FIFA.

F.C. Barcelona joins many other prestigious EA SPORTS partner clubs around the world, including Valencia from Spain's La Liga, Tottenham Hotspur and Manchester City from Barclays Premier League in England, Borussia Dortmund from the German Bundesliga, Olympique Lyonnais and Paris Saint-Germain F.C. from Ligue 1 in France, and AC Milan in Italy's Serie A.

Experience the emotion of scoring great goals in FIFA 14*. Innovations to the award-winning gameplay make the game more authentic and more fun. Dictate the tempo of a match, create chances through midfield, and then unleash the perfect strike. A new feature called Pure Shot and a brand-new ball physics system will transform shooting, making every shot attempt feel real, and when players connect with the perfect strike, feel exhilarating.

FIFA 14 is available for pre-order** now on selected platforms at http://www.origin.com and other retailers. FIFA 14 will release in North America on September 24 and worldwide on September 27 and the game will be available on Xbox One®, the all-in-one games and entertainment system from Microsoft, and the PlayStation®4, later this year. Join the EA SPORTS community at http://www.facebook.com/easports. Follow us on Twitter @easportsfifa and use the hash tag #FIFA14. For information about FIFA 14 visit www.easports.com/fifa.

*Not all features available on all gaming platforms.

In fiscal year 2013, EA posted GAAP net revenue of $3.8 billion. Headquartered in Redwood City, California, EA is recognized for a portfolio of critically acclaimed, high-quality blockbuster brands such as The Sims™, Madden NFL, FIFA Soccer, Need for Speed™, Battlefield™ and Mass Effect™. More information about EA is available at www.ea.com/news.

EA SPORTS, The Sims, SSX, Need for Speed, Mass Effect and Battlefield are trademarks of Electronic Arts Inc. and its subsidiaries. John Madden, NFL, NBA, NCAA, NHL, Tiger Woods PGA TOUR, UFC and FIFA are the property of their respective owners and used with permission. "PlayStation" and "PSP" are registered trademarks of Sony Computer Entertainment Inc. All other trademarks are the property of their respective owners.
In this article: argentina, Barcelona, clubs, EA, EA-Canada, EA-Sports, Electronic-Arts, exclusive-license, fc-barcelona, fifa-14, Konami, licensing, Lionel-Messi, microsoft, official-license, pc, pes-2014, pes-productions, playstation, pro-evolution-soccer-2014, ps3, ps4, soccer, teams, xbox, xbox-one
All products recommended by Engadget are selected by our editorial team, independent of our parent company. Some of our stories include affiliate links. If you buy something through one of these links, we may earn an affiliate commission.