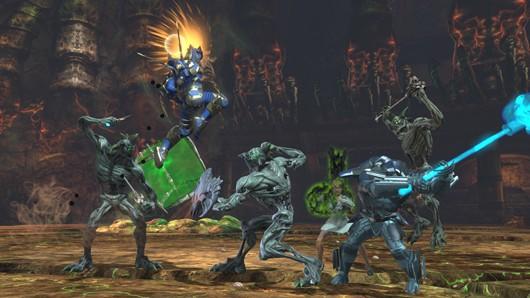 Are you craving more superheroic content in DC Universe Online? SOE has some good news for you in the form of DCUO's latest DLC release. It's called Sons of Trigon, and it will feature new high-level multiplayer and solo stuff as well as the game's 11th power set (Celestial).

SOE hasn't announced an official release date beyond fall 2013, but the firm's new press release does detail what looks to be a pretty meaty update. New legends PvP characters Cheetah and Donna Troy are in the works, as is a new shared zone (Gotham City wasteland) featuring daily solo quests. A new alert and three new duo instances are also coming along with new gear and the requisite feats and collections.

Sons of Trigon will be free for Legendary members. Premium and F2P players can purchase it via the in-game marketplace, the PlayStation Network, or the DCUO website.

[Source: SOE press release]
In this article: console, consoles, dc-universe, dc-universe-online, dcuo, dcuo-dlc, dcuo-sons-of-trigon, dlc, f2p, free-to-play, playstation-3, playstation3, ps3, soe, sons-of-trigon, sony-online-entertainment, superhero, superheroes
All products recommended by Engadget are selected by our editorial team, independent of our parent company. Some of our stories include affiliate links. If you buy something through one of these links, we may earn an affiliate commission.