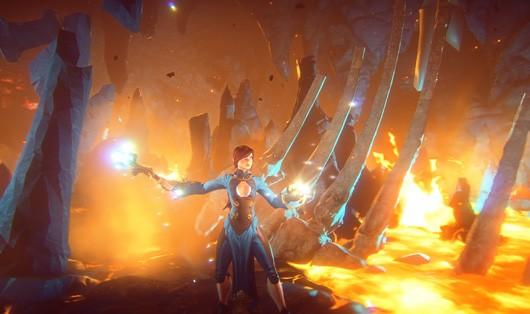 While yesterday's big reveal showed us what races are confirmed as playable so far in EverQuest Next (Dwarf, Human, Ogre, Elf, Dark Elf, and Kerran), only two classes were highlighted during the demonstration. We also discovered that characters will be able to learn more classes -- and there are more than 40 of them -- as they adventure. But what are all the classes and which ones can players choose when they first embark on their next Norrathian exploits?

We cannot answer the latter, but we now have a partial answer to the former. Five of the classes that will be available in EQ Next are: Rogue, Warrior, Tempest, Blademaster, and Wizard. Any, all, or even none of these may be one of eight starting classes.

A few other tidbits about classes were also discussed during SOE panels, including how to distinguish what class a player or NPC is (answer: how s/he stands and holds his or her weapon) and character builds (items plus abilities will together constitute a build). Hungry for more info? Keep your eyes peeled for a more in-depth look at the philosophy and mechanics of classes coming soon!

What happens in Vegas doesn't stay in Vegas, at least where SOE Live is concerned! Massively sent intrepid reporters MJ Guthrie and Karen Bryan to this year's SOE Live, from which they'll be transmitting all the best fan news on EverQuest Next, EverQuest II, DC Universe Online, and the other MMOs on SOE's roster.
In this article: Battlemaster, classes, con, convention, eq, eq-next, eqn, event, everquest, everquest-next, fan-faire, fantasy, las-vegas, Rogue, soe, soe-fan-faire, soe-live, soe-live-2013, sony, sony-online-entertainment, starter-classes, Tempest, Warrior, Wizard
All products recommended by Engadget are selected by our editorial team, independent of our parent company. Some of our stories include affiliate links. If you buy something through one of these links, we may earn an affiliate commission.