Kepler beams back final image from its almost decade-long journey 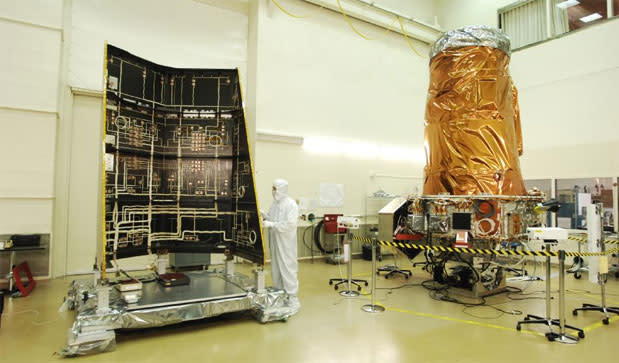 It's had a good run, but it seems like NASA's Kepler telescope is down for the count -- the space agency says it has stopped repair efforts. The 0.95 meter diameter space telescope launched four years ago, tasked with seeking out Earth-sized planets suitable for habitation. All was going well until the rig's gyroscopic reaction wheels began to fail, robbing it of the precision aim needed to continue its task. After months of testing, NASA has concluded that it won't be able to restore the telescope to full working order.

That doesn't mean the mission is at an end, however -- NASA still has to sort troves of previously collected data, thumbing through over 3,500 exoplanet candidates to add to the 135 celestial bodies Kepler has already identified. The hardware may one day see a second life too, as engineers attempt to assess what can be done with the remaining two reaction wheels and the telescope's attitude control thrusters. Without significant (and now abandoned) repair efforts, Kepler will never be precise enough to continue its primary mission, but NASA is hopeful it will eventually find a new purpose.

Following months of analysis and testing, the Kepler Space Telescope team is ending its attempts to restore the spacecraft to full working order, and now is considering what new science research it can carry out in its current condition.

Two of Kepler's four gyroscope-like reaction wheels, which are used to precisely point the spacecraft, have failed. The first was lost in July 2012, and the second in May. Engineers' efforts to restore at least one of the wheels have been unsuccessful.

Kepler completed its prime mission in November 2012 and began its four-year extended mission at that time. However, the spacecraft needs three functioning wheels to continue its search for Earth-sized exoplanets, which are planets outside our solar system, orbiting stars like our sun in what's known as the habitable zone -- the range of distances from a star where the surface temperature of a planet might be suitable for liquid water. As scientists analyze previously collected data, the Kepler team also is looking into whether the space telescope can conduct a different type of science program, including an exoplanet search, using the remaining two good reaction wheels and thrusters.

"Kepler has made extraordinary discoveries in finding exoplanets including several super-Earths in the habitable zone," said John Grunsfeld, associate administrator for NASA's Science Mission Directorate in Washington. "Knowing that Kepler has successfully collected all the data from its prime mission, I am confident that more amazing discoveries are on the horizon."

On Aug. 8, engineers conducted a system-level performance test to evaluate Kepler's current capabilities. They determined wheel 2, which failed last year, can no longer provide the precision pointing necessary for science data collection. The spacecraft was returned to its point rest state, which is a stable configuration where Kepler uses thrusters to control its pointing with minimal fuel use.

"At the beginning of our mission, no one knew if Earth-size planets were abundant in the galaxy. If they were rare, we might be alone," said William Borucki, Kepler science principal investigator at NASA's Ames Research Center in Moffett Field, Calif. "Now at the completion of Kepler observations, the data holds the answer to the question that inspired the mission: Are Earths in the habitable zone of stars like our sun common or rare?

An engineering study will be conducted on the modifications required to manage science operations with the spacecraft using a combination of its remaining two good reaction wheels and thrusters for spacecraft attitude control.

Informed by contributions from the broader science community in response to the call for scientific white papers announced Aug. 2, the Kepler project team will perform a study to identify possible science opportunities for a two-wheel Kepler mission.

Depending on the outcome of these studies, which are expected to be completed later this year, NASA will assess the scientific priority of a two-wheel Kepler mission. Such an assessment may include prioritization relative to other NASA astrophysics missions competing for operational funding at the NASA Senior Review board early next year.

From the data collected in the first half of its mission, Kepler has confirmed 135 exoplanets and identified over 3,500 candidates. The team continues to analyze all four years of collected data, expecting hundreds, if not thousands, of new discoveries including the long-awaited Earth-size planets in the habitable zone of sun-like stars. Though the spacecraft will no longer operate with its unparalleled precision pointing, scientists expect Kepler's most interesting discoveries are still to come.

Meanwhile, preparations are underway for hosting the second Kepler Science Conference Nov. 4-8, at NASA's Ames Research Center. This will be an opportunity to share not only the investigations of the Kepler project team, but also those of the wider science community using publicly accessible data from Kepler.

In this article: Kepler, NASA, Space, spaceexploration, stars, telescope
All products recommended by Engadget are selected by our editorial team, independent of our parent company. Some of our stories include affiliate links. If you buy something through one of these links, we may earn an affiliate commission.