Amber's sensors aim to save farmers' grain from spoilage 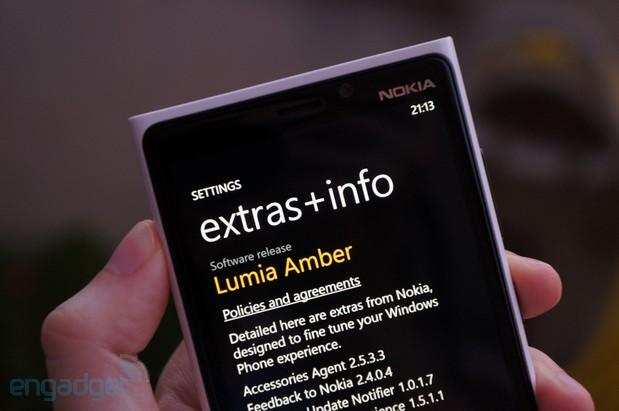 Those unofficial Amber ROMs you (briefly) considered toying with 10 days ago? History. Nokia has just announced that the honest-to-goodness, ready-for-consumption Amber code has been approved, and Lumia owners the world over will begin seeing it hit their Windows Phone 8 handset in the coming days / weeks. The software update is a fairly major one, delivering a wide range of new and improved features and apps, like Nokia Glance Screen with the standby clock and an even better imaging experience that mirrors the one found on the 1020. Users will be graced with a new FM radio player and improvements to Xbox music and the Internet Explorer browser, as well as improved image processing and the Nokia Smart Camera app (which debuted on the Lumia 925).

The Glance Screen acts a bit like the glanceable extras added to the Moto X, but sadly, it won't be available on the Lumia 520 and Lumia 625, which have a smaller display memory. Longstanding Nokia loyalists will surely appreciate the addition of "Flip to silence" and "double-tap to unlock," and those who rely heavily on Here maps will find future updates easier to install. The rollout starts now first for the Lumia 920 and Lumia 820 in selected countries as well as the Lumia 521, Lumia 810, and Lumia 928 in the US, while owners of the Lumia 520, Lumia 620, Lumia 720, Lumia 820 or Lumia 920 will likely have to wait until the end of September.

In this article: amber, gdr2, lumia, mobilepostcross, nokia, smartphone, windows phone, windows phone 8, WindowsPhone, WindowsPhone8, wp8
All products recommended by Engadget are selected by our editorial team, independent of our parent company. Some of our stories include affiliate links. If you buy something through one of these links, we may earn an affiliate commission.